Bell's Cathedrals: Wimborne Minster and Christchurch Priory A Short History of Their Foundation and a Description of Their Buildings 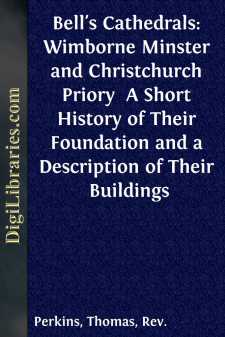 CHAPTER I HISTORY OF THE BUILDING

Of the churches connected with the religious houses which once existed in the county of Dorset, three only remain to the present day. Of some of the rest we have ruins, others have entirely disappeared. But the town of Sherborne, once the bishop-stool of the sainted Aldhelm, who overlooked a vast diocese comprising a great portion of the West Saxon kingdom, has its Abbey now used as its Parish Church. The great Abbey of Milton, founded by Æthelstan, has handed down to us its choir and transepts—rebuilt in the fourteenth century, after the former church had been destroyed by fire—and this, though private property, is still used for occasional services; and the minster church at Wimborne has became the church of the parish of Wimborne Minster.

The town has been by many supposed to stand on the site of the Roman Vindogladia, though this station has by others been identified with Gussage Cowdown, or the circular encampment of Badbury Rings, about three miles to the north-west of Wimborne Minster. Be this as it may, the district was occupied by the Roman conquerors of our island; and Roman pottery and other remains have been found in the neighbourhood, including a small portion of pavement beneath the floor of the minster church.

The derivation of the name Wimborne, or Winborne as we find it sometimes written, has been much disputed; but as we find the same word appearing as the name of several other places which lie on the course of the same stream, now generally called the Allen, though sometimes the Wim, it is highly probable that the name is derived from that of the river. Compound names for villages are very common in Dorset—the first word being the name of the river on which the village stands, the second being added to distinguish one village from another. Thus we find along the Tarrant, villages known as Tarrant Gunville, Tarrant Hinton, Tarrant Launceston, Tarrant Monkton, etc.; and along the Winterborne we find Winterborne Houghton, Winterborne Stickland, Winterborne Clenstone, etc.; and in like manner we meet with Monkton up Wimborne, Wimborne Saint Giles, and Wimborne Minster along the course of the Allen. The characteristic name of Winterborne for a brook that is such in winter only, but is a dried-up bed in a hot summer is borne by two streams in Dorset, each giving its name to a string of villages. May not the word Wimborne or Winborne be a contraction for this same word Winterborne, the "burn" of the rainy winter months, applied to the little stream of the Allen, though it cannot now be said to be dry in summer?

The small town of Wimborne Minster stands not far from the junction of the Allen with the slow-running Dorset Stour, in the midst of pleasant fertile meadow-land, from which here and there some low hills rise. Its chief glory has been, and probably always will be, its splendid church, with its central Norman and its Western Perpendicular towers, its Norman and Decorated nave, its Early English choir, and its numerous tombs and monuments of those whose names are recorded in the history of the country.

The exact year of the foundation of the original religious house is differently given in various ancient documents: the dates vary from 705 A.D. to 723 A.D. At this time, Ine was king of the West Saxons; and one of his sisters, Cudburh—or Cuthberga, as her name appears in its Latinised form—was espoused or married to Egfred, or, as he is often called, Osric, the Northumbrian king, but the marriage was never consummated, and the lady as soon as possible separated from him and retired to the convent at Barking, and afterwards founded the convent at Wimborne. Some say that she objected to the intemperate habits of her espoused as soon as she met him; others, that having previously vowed herself to heaven, she persuaded him to release her from the engagement to him, which had been arranged without her wishes being consulted. Her sister Quinberga is stated to have been associated with her in the foundation of the religious house, and both were buried within its precincts, and both were afterwards canonised; Saint Cuthberga was commemorated on August 31st "as a virgin but not a martyr." A special service appointed for the day is to be found in a Missal kept in the Library of the Cathedral Church at Salisbury, in which the following prayer occurs:—