Bell's Cathedrals: The Cathedral Church of Durham A Description of Its Fabric and A Brief History of the Espiscopal See 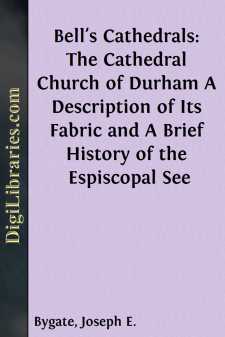 CHAPTER IThe Building Of The Church

The traveller northward by the East Coast Route cannot fail to be struck by the beauty of the city of Durham, with its red-roofed houses nestling beneath the majestic site of the cathedral and castle. For splendid position the Cathedral of Durham stands unequalled in this country; on the Continent, perhaps that of Albi can alone be compared with it in this respect. The cathedral and Norman Castle are upon the summit of a lofty tongue of land which is almost surrounded by the River Wear. In parts the banks are rocky and steep, in others thickly wooded. The river itself is spanned here and there by fine and historic bridges.

The early history of Durham is obscure. There are many vague legends in existence, a natural consequence, perhaps, when we remember the various and often speedy changes of ownership to which that part of the country was for centuries subjected.

To lead up clearly to the founding of the Cathedral of Durham, it will be necessary to describe briefly the earliest introduction of Christianity into the north of England. That Christianity was known in this country during the time of the Romans there is sufficient evidence to prove. There is, however, little to show that it existed in the north to any appreciable extent. All or nearly all the carved stones, altars, etc., disinterred in that part of the country have been of undoubted Pagan origin.

The ancient kingdom of Northumbria comprised the present counties of Durham, Northumberland, and Yorkshire, and a part of the south-east of Scotland as far north as the Firth of Forth. This kingdom was sub-divided into two portions. The Southern, or Deira, extended from the Tees to the Humber, and the Northern, or Bernicia, reached from the Tees to the Firth of Forth. The province of Bernicia was settled about A.D. 547 by Ida, a chief of the Angles, who made his headquarters on a steep rock on the sea-coast about sixteen miles south of Berwick. He was succeeded by his son Ethelric, who built himself a stronghold, which he named after his wife Bebbanburgh, a name still retained in a shortened form—Bamburgh. Ethelric was followed by Ella, whose son Edwin was driven into exile by his fierce brother-in-law, Ethelfrith, and took possession of Deira, the southern province of Northumbria. After attaining his majority, Edwin, assisted by Redwald, regained his kingdom, and eventually ruled over the whole of Northumbria; it is during his reign that we find the first authentic history of Christianity in the north. Edwin married Ethelburga, a daughter of Ethelbert, king of Kent, who had been converted to Christianity by the preaching of S. Augustine. He himself received baptism at the hands of Paulinus (625-633), the great Roman missionary, who was sent north with the Princess Ethelburga. Paulinus fixed his headquarters at York, where he built his church, the forerunner of the present cathedral. This attempt of the Romans to christianise Northumbria was, however, of short duration. Cadwalla and Penda rose against them, and Edwin fell in battle at Hatfield Moor in Yorkshire. Paulinus, despairing of the cause, returned to Kent with the queen-widow Ethelburga and her children; and under Cadwalla and Penda, the kingdom soon relapsed into Paganism.

We must now direct our attention to a small, barren island on the west coast of Scotland, Iona. Here came a voluntary exile (A.D. 563), Columba, a monk, said to have been a descendant of the Irish kings. Here he lived and founded a great missionary monastery, which afterwards became the centre of Christian influence in Scotland and the north of England. He and his followers were active workers; they wrote Gospels and devotional books, preached, and built churches of wood. Columba died (A.D. 597), but his work was continued.

In 634, Oswald, a son of Ethelfrith, became king of Northumbria. In his youth he, with his brothers, had been obliged to flee to Scotland, where, during his exile, Oswald was converted to Christianity by the teachers of Iona. On his return he defeated and killed Cadwalla at Hevenfeld, or Heavenfield, near Hexham, in 634, and became the means of finally introducing Christianity into his kingdom. Soon after he became king, Oswald sent to Iona for help, and in reply came a monk, who, for some reason, said by old writers to be his harshness, failed in his mission. He was replaced by another monk named Aidan (635-651), who was eminently successful. Beda speaks of him as "a man of great piety and zeal, combined with tender charity and gentleness." Aidan became intimately associated with King Oswald, the two working together, and he chose for his headquarters the small sandy island of Lindisfarne, off the Northumbrian coast, which we now know as "Holy Island."

Lindisfarne thus resembled Iona, and it is probable that the similarity of position and surroundings influenced Aidan in his choice....