Bell's Cathedrals: The Abbey Church of Tewkesbury with some Account of the Priory Church of Deerhurst Gloucestershire 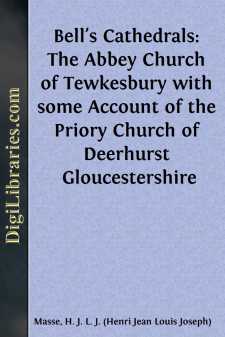 CHAPTER I. HISTORY OF THE FOUNDATION AND FABRIC OF THE ABBEY CHURCH, AND SOME ACCOUNT OF ITS BENEFACTORS.

Tradition, originating in the desire to account for the name of the town, would assign the foundation of a cell or chapel to Theoc, or in Latin form Theocus, in or about 655. In support of this theory Camden and others assert that it was called in Anglo-Saxon times Theocsburg or Theotisbyrg. Others would derive the name from the Greek "Theotokos," as the Church is dedicated to St. Mary, and others again refer us back to a very early name, Etocisceu—Latinised as Etocessa. In Domesday Book the town is called Teodechesberie, and throughout the Chronicles of the Abbey is called Theokusburia.

The Chronicles of the Abbey tell us that the first monastery at Tewkesbury was built by two Saxon nobles, Oddo and Doddo, in or about the year 715, a time when Mercia was flourishing under Ethelred, and later, under Kenred and Ethelbald. It was dedicated to the Virgin Mary, and endowed with the manor of Stanway and other lands for the support of the Benedictine monks who, under a Prior, were there installed. Oddo and Doddo died soon afterwards, and were buried in the abbey church of Pershore.

Much has been written about these mythical founders, and confusion in the minds of the chroniclers, and in those of subsequent writers too, has been caused by the similarity between the names of Oddo and Doddo, and Odda and Dodda. It is stated in the old Tewkesbury Chronicle that Oddo and Doddo were brothers, who in 715 founded a small cell at Tewkesbury, and that Doddo built a church at Deerhurst to show his love for a brother who had died some time before. They seem to have been two noble dukes, members of an illustrious family and renowned for their great virtue. Oddo is said to have become a monk, and after his death to have been buried at Pershore Abbey.

As Mr. Butterworth points out in his book on Deerhurst, this seems to be a travesty of what actually happened. There were in the eleventh century two brothers, Odda and Ælfric, with probably a third brother, Dodda, who were related to Edward the Confessor, and were, besides, his friends and followers. Charters are extant bearing their signatures and names, and covering the period 1015-1051. It is this Odda who caused to be built the "aula regia" at Deerhurst in memory of his brother Ælfric, with a stone bearing an inscription of which a copy is now in the Saxon Chapel at Deerhurst. This Odda, with his brother, was buried at Pershore. Odda's existence at this time is further confirmed by the Anglo-Saxon Chronicle (edited by Ingram), which states that Odda was in 1051 made Earl over Devonshire, Somerset, Dorset, and the Welsh. The same chronicle says that Odda was also called Agelwin. Florence of Worcester says that he was also called Ethelwin.

It is perhaps easy to see how a chronicler writing 250 years later, should be led to assume that Oddo and Doddo were identical with Odda and Dodda. Sir Charles Isham's "Registrum Theokusburiæ" gives a full-page illustration of this "par nobile fratrum," as Dr....