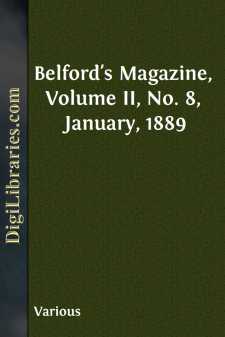 The patience with which mankind submits to the demands of tyrants has been the wonder of each succeeding age, and heroes are made of those who break one yoke only to bow with servility to a greater. The Roman soldier, returning from wars in which his valor had won wealth and empire for his rulers, was easily content to become first a tenant, and then a serf, upon the very lands he had tilled as owner before his voluntary exile as his country’s defender, kissing the hand that oppressed, so long as it dispensed, as charity, a portion of his tithes and rentals in sports and food. And now, after ages of wonder and criticism, the soldiers of our nineteenth-century civilization outvie their Roman prototypes in submitting to exactions and injustice of which Nero was incapable either of imagining or executing, bowing subserviently to the more ingenious tyrant of an advanced civilization, if but his hand drop farthings of pensions in return for talents of extortion. It may not be that the soldiers and citizens of America shall become so thoroughly debauched and degraded, nor that the consequences of their revolt shall be a burning capitol and a terrified monopolist; but if these evils are to be averted, it will be only because fearless hands tear the mask from our modern Neros, and tireless arms hold up to popular view the naked picture of national disgrace.

Twenty-eight years ago the first step had been taken towards the final overthrow of the objective form of human slavery. There were, even in those days, cranks who were dreaming of new harmonies in the songs of liberty; and when tyranny opposed force to the righteous demands of constitutional government, ploughshares rusted in the neglected fields, workshops looked to alien lands for toilers, while patriots answered the bugle-call, and a nation was freed from an eating cancer. But what was the return for such sacrifices? Surely, if ever were soldiers entitled to fair and full reward, it was those who responded to the repeated call of Lincoln for aid in suppressing the most gigantic rebellion of history—not in the form of driblets of charity, doled with cunning arts to secure their submission to extortions, not offered as a bribe to unblushing perjury and denied to honest suffering, but simple and exact justice, involving a full performance of national obligation in return for the stipulated discharge of the duty of citizenship. The simple statement of facts of history will serve to expose the methods of those who pose as par excellence the soldiers’ friends and the defenders of national faith.

The soldiers who enlisted in the war of the rebellion were promised by the government, in addition to varying bounties, a stipulated sum of money per month. It requires no argument to prove that the faith of the government was as much pledged to the citizen who risked his life, as to him who merely risked a portion of his wealth in a secured loan to the government. But the record shows that the pay of the former was reduced by nearly sixty per cent, while the returns of the latter were doubled, trebled, and quadrupled; that in many cases government obligations were closed by the erection of a cheap cast-iron tablet over a dead hero, while the descendants of bondholders were guarded in an undisturbed enjoyment of the fruits of their ancestors’ greed. For, after the armies were in the field, the same legislative enactment that reduced the value of the soldier’s pay increased that of the creditor’s bond, by providing that the money of the soldier should be rapidly depreciated in value, while the interest upon bonds should be payable in coin; and then, after the war was over, another and more valuable bond was prepared, that should relieve the favored creditor of all fear of losing his hold upon the treasury by the payment of his debt. That the purpose of the lawmakers was deliberate, was exposed in a speech by Senator Sherman, who was Chairman of the Finance Committee of the Senate while the soldiers in the trenches were being robbed in the interest of the creditors at home. In reviewing the financial policy of his party during the war, Mr. Sherman said, in a speech in the Senate, July 14th, 1868 [Footnote: Congressional Record, page 4044]:

“It was, then, our policy during the war, to depreciate the value of United States notes, so that they would come into the Treasury more freely for our bonds....