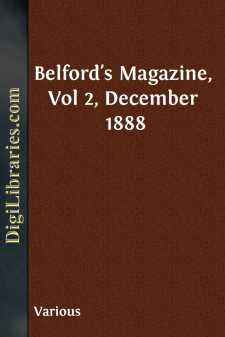 THE MORNING BEFORE CHRISTMAS.

When Malcolm Rutherford entered the library, on the morning of a certain day before Christmas, he was surprised to find his wife in tears. This was all the more vexatious because he knew that she possessed everything to make a reasonable woman happy; but Mrs. Rutherford was not always a reasonable woman, being prone to causeless jealousy and impulsive to rashness. They lived about five miles from Winchester, Va., in which city Rutherford had a fine legal practice.

"What's the matter?" he asked. "Have any of our guests disappointed us?"

"No," she replied, drying her eyes. "They have all arrived and are in their rooms; and"—here she assumed an air of mystery—"in addition to the house-party, I have invited a couple of strangers to dine with us to-day."

"Indeed! Isn't it just a little extraordinary to invite strangers?" he interrupted.

"Strangers they are to me, but not to you. The woman claimed to be a friend of yours."

"Well, I have some friends whom you do not know."

"Ah!" continued his wife, in a tone of triumph, "I think I have at last detected you. The woman who called upon me this morning—she has but just gone—was a Mrs. Honey. She had a letter of introduction from Lydia Wildfen; and what do you think her business was?"

"How should I know?"

"To solicit our patronage for a school she is going to open in Winchester. She says that you can recommend her because you once personally placed a young girl-pupil under her charge. Though dying of mortification at your having such a secret from me, I pretended to know all about it, and as your friend I asked her to dine with us to-day and to bring her husband."

"It is not very good; it is very bad. I demand an immediate explanation of all the circumstances."

"I cannot give it," Rutherford replied, meditatively; "not, at least, until after Christmas."

"A pretty Christmas I shall pass with these dreadful suspicions of you gnawing at my very heart. You must—you shall explain it all to me."

"I neither can nor will," said Rutherford, angrily; and he abruptly terminated the conversation by turning on his heel and leaving her to suffer the tortures of what she believed to be well-founded jealousy.

Rutherford strode down the one street of the suburban village in such blind haste that he ran full tilt against old Mr. Robert Plowden, who was taking a stroll, and who, with his young wife, was a guest of the Rutherfords that Christmas.

"Dear me!" he exclaimed, "you almost knocked me over, Rutherford."

"Excuse me. I'm in an awful hurry to get to the telegraph office. It's fortunate I've met you here, as I've something to say to you which I would sooner not say indoors."

"You surprise me," said Plowden, falling into step with Rutherford. "Is it anything serious?"

"Yes. I will come to the point, so as not to keep you in suspense. Although so long settled in Virginia, you are an Englishman?"

Plowden nodded, and Rutherford continued: "And although, before you married your present wife, always supposed to be a bachelor, in reality you left a wife in England."

"Merciful heavens!" exclaimed Plowden, half-falling against Rutherford in his surprise....