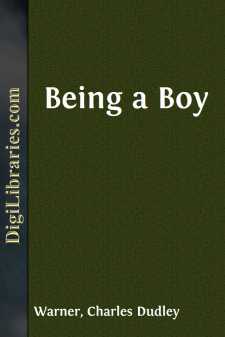 I. BEING A BOY

One of the best things in the world to be is a boy; it requires no experience, though it needs some practice to be a good one. The disadvantage of the position is that it does not last long enough; it is soon over; just as you get used to being a boy, you have to be something else, with a good deal more work to do and not half so much fun. And yet every boy is anxious to be a man, and is very uneasy with the restrictions that are put upon him as a boy. Good fun as it is to yoke up the calves and play work, there is not a boy on a farm but would rather drive a yoke of oxen at real work. What a glorious feeling it is, indeed, when a boy is for the first time given the long whip and permitted to drive the oxen, walking by their side, swinging the long lash, and shouting "Gee, Buck!" "Haw, Golden!" "Whoa, Bright!" and all the rest of that remarkable language, until he is red in the face, and all the neighbors for half a mile are aware that something unusual is going on. If I were a boy, I am not sure but I would rather drive the oxen than have a birthday. The proudest day of my life was one day when I rode on the neap of the cart, and drove the oxen, all alone, with a load of apples to the cider-mill. I was so little that it was a wonder that I did n't fall off, and get under the broad wheels. Nothing could make a boy, who cared anything for his appearance, feel flatter than to be run over by the broad tire of a cart-wheel. But I never heard of one who was, and I don't believe one ever will be. As I said, it was a great day for me, but I don't remember that the oxen cared much about it. They sagged along in their great clumsy way, switching their tails in my face occasionally, and now and then giving a lurch to this or that side of the road, attracted by a choice tuft of grass. And then I "came the Julius Caesar" over them, if you will allow me to use such a slang expression, a liberty I never should permit you. I don't know that Julius Caesar ever drove cattle, though he must often have seen the peasants from the Campagna "haw" and "gee" them round the Forum (of course in Latin, a language that those cattle understood as well as ours do English); but what I mean is, that I stood up and "hollered" with all my might, as everybody does with oxen, as if they were born deaf, and whacked them with the long lash over the head, just as the big folks did when they drove. I think now that it was a cowardly thing to crack the patient old fellows over the face and eyes, and make them wink in their meek manner. If I am ever a boy again on a farm, I shall speak gently to the oxen, and not go screaming round the farm like a crazy man; and I shall not hit them a cruel cut with the lash every few minutes, because it looks big to do so and I cannot think of anything else to do. I never liked lickings myself, and I don't know why an ox should like them, especially as he cannot reason about the moral improvement he is to get out of them.

Speaking of Latin reminds me that I once taught my cows Latin....