Behind the News: Voices from Goa's Press 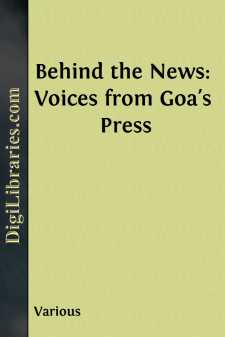 By Ben AntaoBesides his stint referred to in this chapter, Benedito Martinho Herculano Antao (b, 1935) worked for the Indian Express in Bombay (1965-66). He then won a journalism award from the World Press Institute, moved to the US for a year's study, work and travel. Later, he spent 10 weeks at the Denver Post (1967), worked for a Catholic weekly in Toronto, and was a copy editor in the mid-seventies at a major Toronto daily. He also taught high school English, drama and religion for 22 years, before retiring in 1998, and qualified as a certified financial planner in 1988. Currently, he is involved in fiction writing, for which purpose he sees journalism as a "great training ground".

When I first read it in one of the books on journalism that I borrowed from the USIS library in Bombay in the late 'fifties, I was filled with such fervor as to consider the vocation in journalism that I was contemplating on, at the time, akin to the priesthood. The concept of 'freedom of the press' particularly attracted and engaged my young mind, burning with idealism to bring about genuine equality in Indian society and to see us as a truly "honorable people" as the Prime Minister Jawaharlal Nehru had said we were.

In other words, journalism would offer me a platform to make a difference.

After a season of doing freelance sports reporting for The Indian Express in the city now called Mumbai, I felt much like a lover. One who is not content with merely kissing but wants to explore the whole body. And as a follower of another truism, namely, he who seeks finds the way, lucky circumstance fell into my lap and I found myself doing freelance work for the Goan Tribune, a fortnightly published in Bombay to espouse the cause of Goa's political freedom from the Portuguese rule.

Here I got the opportunity not only to write about sports, but also to do general news reporting and profiles of prominent Goans. In little over a year, though, my budding love affair discovered a flaw in my inamorata — the lady fancied the use of hyperbole and propaganda as legitimate means to promote herself. My idealism received a jolt of reality when Lambert Mascarenhas, editor of the periodical then, engaged in propagandist campaigning, suggesting that such slanted writing was necessary to achieve the end. However, my burning desire to express myself in writing overruled my squeamishness.

After the Liberation of Goa in 1961, Lambert went to Goa and became joint editor of a new English-language daily, The Navhind Times, owned and published by the Dempo Brothers, who had become wealthy in the mining business. My fascination for the mistress of journalism remained still intact, not to mention the hidden agenda of my wanting to change the world.

Considering myself as a protege of Lambert, I enjoyed a special status at the paper, doing both reporting and sub-editing....