Bee and Butterfly A Tale of Two Cousins

by Adelia B. (Adelia Belle) Beard 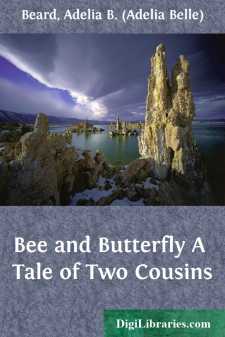 Chapter I An Impulse of Mischief "When to mischief mortals bend their will,How soon they find fit instruments of ill." —Pope. Rape of the Lock.

It was four o'clock. The little town of Louisiana, Missouri, had slumbered all afternoon in the spring sunshine, but woke suddenly to life as the doors of the big brick school house opened, and the boys and girls poured forth. As the outgoing stream of pupils reached the gate several High School girls left the line, and withdrawing a short distance from the others, formed a little group by themselves, standing with faces turned expectantly toward the door of the building as though they were waiting for some one.

"I wonder why Bee doesn't come!" exclaimed one of the girls impatiently as the line dwindled to two or three pupils, and then ceased altogether. "I don't see why she pokes around that old school house so long?"

"She was going to help Professor Lawrence with some specimens," spoke a tall girl quickly. "You know Bee likes—"

"Bugs," finished the other girl with a shiver. "Oo-ooh! I wouldn't handle the worms, and creepy, crawly things that Bee Raymond does for anything."

"It isn't bugs at all," answered the tall girl with a trace of indignation in her voice. "It's caterpillars and butterflies. Bee's making a special study of them so as to surprise her father when he comes from abroad. He's a Lepidopterist, you know, and she is working to fit herself to be his secretary."

"Is he coming home soon, Edna?" queried one of the others.

"Not for two more years," responded Edna, who seemed to be well informed on the matter. "And just think, girls! Bee hasn't seen him for ten years."

"Fancy not seeing one's own father in all that time," remarked the girl who had first spoken. "Of course, it's just splendid to get letters from abroad, and to have all those lovely things he sends her; but I don't know, I think I'd rather have my father."

"Why, so would Bee," laughed Edna. "She's just crazy for him to come home. She—"

"There she is now," cried one, and with new interest each member of the group turned to look at the girl who at this moment came through the door of the school house.

Beatrice Raymond was a slender girl, tall for her fifteen years, with movements full of unconscious grace; for she had always been much in the open air and was accustomed to perfect freedom in her limbs. She could run as fast and jump as far as many boys who "fancied" themselves as athletes. Her hair was very dark, very straight, and very abundant. Her eyes were large, dark, and expressive; her complexion was dark also and without color. She created the thought in the minds of those observers who looked below the surface that there was intellect—thoughtful, loving, and perhaps unusual intellect. A strap of books was flung over her left shoulder, boy fashion, and her hat was set carelessly on one side of her head. She was laughing as she came to them, and the girls crowded around her eagerly.

"It's a conundrum," answered Beatrice merrily....