Battles with the Sea 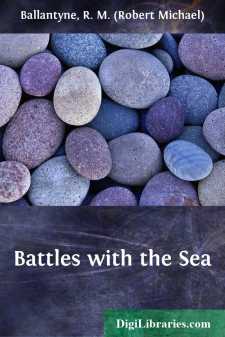 Heroes of the Lifeboat and Rocket. Skirmishes with the Subject Generally.

It ought to be known to all English boys that there is a terrible and costly war in which the British nation is at all times engaged. No intervals of peace mark the course of this war. Cessations of hostilities there are for brief periods, but no treaties of peace. “War to the knife” is its character. Quarter is neither given nor sought. Our foe is unfeeling, unrelenting. He wastes no time in diplomatic preliminaries; he scorns the courtesies of national life. No ambassadors are recalled, no declarations of war made. Like the Red Savage he steals upon us unawares, and, with a roar of wrathful fury, settles down to his deadly work.

How does this war progress? It is needful to put and reiterate this question from time to time, because new generations of boys are always growing up, who, so far from being familiar with the stirring episodes of this war, and the daring deeds of valour performed, scarcely realise the fact that such a war is being carried on at all, much less that it costs hundreds of lives and millions of money every year.

It may be styled a naval war, being waged chiefly in boats upon the sea. It is a war which will never cease, because our foe is invincible, and we will never give in; a war which, unlike much ordinary warfare, is never unjust or unnecessary; which cannot be avoided, which is conducted on the most barbarous principles of deathless enmity, but which, nevertheless, brings true glory and honour to those heroes who are ever ready, night and day, to take their lives in their hands and rush into the thick of the furious fray.

Although this great war began—at least in a systematic manner—only little more than fifty years ago, it will not end until the hearts of brave and generous Britons cease to beat, and the wild winds cease to blow, for the undying and unconquerable enemy of whom we write is—the Storm!

“Death or victory!” the old familiar warwhoop, is not the final war-cry here. Death is, indeed, always faced—sometimes met—and victory is often gained; but, final conquests being impossible, and the “piping times of peace” being out of the question, the signal for the onset has been altered, and the world’s old battle-cry has been exchanged for the soul-stirring shout of “Rescue the perishing!”

Though our foe cannot be slain, he can, like the genii of Eastern story, be baffled.

In the days of old, the Storm had it nearly all his own way. Hearts, indeed, were not less brave, but munitions of war were wanting. In this matter, as in everything else, the world is better off now than it was then. Our weapons are more perfect, our engines more formidable. We can now dash at our enemy in the very heart of his own terrible strongholds; fight him where even the boldest of the ancient Vikings did not dare to venture, and rescue the prey from the very jaws of death amid the scenes of its wildest revelry.

The heroes who recruit the battalions of our invincible army are the bronzed and stalwart men of our sea-coast towns, villages, and hamlets—men who have had much and long experience of the foe with whom they have to deal....