Baseball Joe Around the World Pitching on a Grand Tour 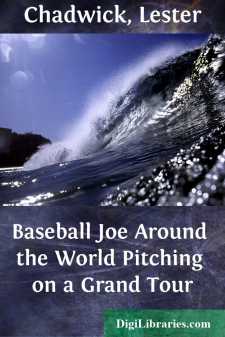 CHAPTER I IN DEADLY PERIL

“Great Scott! Look at this!”

Joe Matson, or “Baseball Joe,” as he was better known throughout the country, sprang to his feet and held out a New York paper with headlines which took up a third of the page.

There were three other occupants of the room in the cozy home at Riverside, where Joe had come to rest up after his glorious victory in the last game of the World’s Series, and they looked up in surprise and some alarm.

“Land’s sakes!” exclaimed his mother, pausing just as she was about to bite off a thread. “You gave me such a start, Joe! What on earth has happened?”

“What’s got my little brother so excited?” mocked his pretty sister, Clara.

“Has an earthquake destroyed the Polo Grounds?” drawled Jim Barclay, Joe’s special chum and fellow pitcher on the Giant team.

“Not so bad as that,” replied Joe, cooling down a bit; “but it’s something that will make McRae and the whole Polo Grounds outfit throw a fit if it’s true.”

Jim snatched the paper from Joe’s hands, with the familiarity born of long acquaintance, and as his eyes fell on the headlines he gave a whistle of surprise.

“‘Third Major League a Certainty,’” he read. “Gee whiz, Joe! I don’t wonder it upset you. That’s news for fair.”

“Is that all?” pouted Clara, who had been having a very interesting conversation with handsome Jim Barclay, and did not relish being interrupted.

“Is that all?” cried Joe, as he began to pace the floor excitedly. “I tell you, Sis, it’s plenty. If it’s true, it means the old Brotherhood days all over again. It means a fight to disrupt the National and the American Leagues. It means all sorts of trickery and breaking of contracts. It means distrust and suspicion between the members of the different teams. It means—oh, well, what doesn’t it mean? I’d rather lose a thousand dollars than know that the news is true.”

“But perhaps it isn’t true,” suggested Clara, sobered a little by her brother’s earnestness. “You can’t believe half the things you see in the papers.”

“Will it hurt your position with the Giants, Joe?” asked Mrs. Matson, her motherly instincts taking alarm at anything that threatened her idolized son.

Joe stopped beside his mother’s chair and patted her head affectionately.

“Not for a long time if at all, Momsey,” he replied reassuringly. “My contract with the Giants has two years to run, and it’s as good as gold, even if I didn’t throw a ball in all that time. It wasn’t the money I was thinking about. As a matter of fact, I could squeeze double the money out of McRae, if I were mean enough to take advantage of him. It’s the damage that will be done to the game that’s bothering me.”

“Perhaps it won’t be as bad as you think,” ventured his mother. “You know the old saying that ‘the worst things that befall us are the things that never happen.’”