Bart Stirling's Road to Success Or, The Young Express Agent 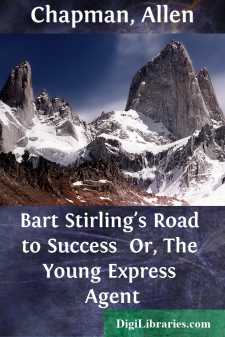 THE THIRD OF JULY

"Because that's the orders; and you can't smoke in this room."

Lemuel Wacker dropped his hand from the door knob on which it rested, and put his pipe in his pocket, but his shoulders hunched up and his unpleasant face began to scowl.

"I am—for the time being," retorted Bart, cheerfully.

"Well," said Wacker, with an ugly sidelong look, "I don't take insolence from anyone with the big head. I reckon ten year's service with the B. & M. entitles a man to know his rights."

"I don't want no mistering!" he growled. "Lem's good enough for me. And I don't take no call-down from any stuck-up kid, I want you to understand that."

"You'd better get to the crossing if you're making any pretense of real work," suggested Bart just then.

As he spoke Bart pointed through the open window across the tracks to the switch shanty at the side of the street crossing.

A train was coming. Mr. Lemuel Wacker was "subbing" as extra for the superannuated old cripple whose sole duty was to wave a flag as trains went by. To this duty Wacker sprang with alacrity.

Bart dismissed the man from his mind, and, whistling a cheery tune, bent over the book in which he had been writing for the past twenty minutes.

This was the register of the local express office of the B. & M., and at present, as Bart had said, he was "running it."

The express shed was a one-story, substantial frame building having two rooms. It stood in the center of a network of tracks close to the freight depot and switch tower, and a platform ran its length front and rear.

Framed by the window an active railroad panorama spread out, and beyond that view the quaint town of Pleasantville.

Bart had spent all his young life here. He knew every nook and corner of the place, and nearly every man, woman and child in the village.

Pleasantville did not belie its name to Bart's way of thinking. He voted its people, its surroundings, and life in general there, as pleasant as could well be.

Here he was born, and he had found nothing to complain of, although he was what might be called a poor boy.

There were his mother, his two sisters and two small brothers at home, and sometimes it took a good deal to go around, but Bart's father had a steady job, and Bart himself was an agreeable, willing boy, just at the threshold of doing something to earn a living and wide-awake for the earliest opportunity.

Mr. Stirling had been express agent for the B. & M. for eight years, and was counted a reliable, efficient employee of the company.

For some months, however, his health had not been of the best, and Bart had been glad when he was impressed into service to relieve his father when laid up with his occasional foe, the rheumatism, or to watch the office at mealtimes....