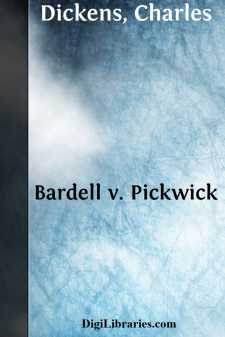 There are few things more familiar or more interesting to the public than this cause célèbre.  It is better known than many a real case: for every one knows the Judge, his name and remarks—also the Counsel—(notably Sergeant Buzfuz)—the witnessess, and what they said—and of course all about the Plaintiff and the famous Defendant.  It was tried over seventy years ago at “the Guildhall Settens,” and was described by Boz some sixty-three years ago.  Yet every detail seems fresh—and as fresh as ever.  It is astonishing that a purely technical sketch like this, whose humours might be relished only by such specialists as Barristers and Attorneys, who would understand the jokes levelled at the Profession, should be so well understanded of the people.  All see the point of the legal satire.  It is a quite a prodigy.  Boz had the art, in an extraordinary degree, of thus vividly commending trade processes, professional allusions, and methods to outsiders, and making them humourous and intelligible.  Witness Jackson, when he came to “serve” Mr. Pickwick and friends with the subpœnas.  It is a dry, business-like process, but how racy Boz made it.  A joke sparkles in every line.

This trial for Breach has been debated over and over again among lawyers and barristers, some contending that “there was no evidence at all to go to the Jury” as to a promise; others insisting on mis-direction, and that there was evidence that ought not to have been admitted.  The law has since been changed, and by later Acts both Mrs. Bardell and Mr. Pickwick would have been allowed to tell their stories and to have been cross-examined.  Mrs. Bardell was almost justified in supposing that Mr. Pickwick was offering his hand when he was merely speaking of engaging a man-servant.  But then the whole would have been spoiled.  Under the present systems, this would all have come out.  Mr. Pickwick, when it came to his turn, would have explained what his proceedings meant.  It is a most perfect and vivid satire on the hackneyed methods of the lawyers when dealing with the witnesses.  Nothing can be more natural or more graphic.  It is maintained to something between the level of comedy and farce: nor is there the least exaggeration.  It applies now as it did then, though not to the same topics.  A hectoring, bullying Counsel, threatening and cruel, would interfere with the pleasant tone of the play; but it is all the same conveyed.  There is a likeness to Bardell v. Pickwick in another Burlesque case, tried in our day, the well-known “Trial by Jury,” the joint work of Mr. Gilbert and the late Sir Arthur Sullivan.  The general tone of both is the same and in the modern work there is a general Pickwickian flavour.  Sir Arthur’s music, too, is highly “Pickwickian,” and the joint effort of the two humorists is infinitely diverting.  The Judge is something of a Stareleigh.

The truth is that Boz, the engenderer of these facetiæ, apart from his literary gift, was one of the most brilliant, capable young fellows of his generation.  Whatever he did, he did in the best way, and in the brightest way.  But his power of observation and of seeing what might be termed the humorous quiddity of anything, was extraordinary.

To put absurdity in a proper view for satirical purposes, it has to be generalised from a number of instances, familiar to all.  Those legal oddities, the public had seen over and over again, but they had passed unnoticed till this clever observer set to work and noted them.  As I say, it required a deep knowledge of the law to set these things in a grotesque light.

Boz had been a sort of general reporter on the Chronicle: he “took” everything.  He had reported at police courts as well as at the law courts.  His quick and bright intelligence seized the humours here, as it did those of the street.  He later reported in the Gallery, and was dispatched across country in post-chaises to “take” eminent political speakers—always winning the hearty commendation of his employers for his zeal and energy.

THE CAUSE OF ACTION.

Mr. Pickwick was a well-to-do bachelor, who lived by himself near the city, where he had been in trade.  His age was about fifty, as can be accurately calculated by his remark on the sliding at Manor Farm.  “I used to do so on the gutters when I was a boy ....