Baddeck, and That Sort of Thing 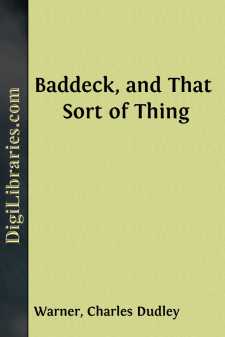 BADDECK AND THAT SORT OF THING I "Ay, now I am in Arden: the more fool I; when I was at home,I was in a better place; but travellers must be content."—TOUCHSTONE.

Two comrades and travelers, who sought a better country than the United States in the month of August, found themselves one evening in apparent possession of the ancient town of Boston.

The shops were closed at early candle-light; the fashionable inhabitants had retired into the country, or into the second-story-back, of their princely residences, and even an air of tender gloom settled upon the Common. The streets were almost empty, and one passed into the burnt district, where the scarred ruins and the uplifting piles of new brick and stone spread abroad under the flooding light of a full moon like another Pompeii, without any increase in his feeling of tranquil seclusion. Even the news-offices had put up their shutters, and a confiding stranger could nowhere buy a guide-book to help his wandering feet about the reposeful city, or to show him how to get out of it. There was, to be sure, a cheerful tinkle of horse-car bells in the air, and in the creeping vehicles which created this levity of sound were a few lonesome passengers on their way to Scollay's Square; but the two travelers, not having well-regulated minds, had no desire to go there. What would have become of Boston if the great fire had reached this sacred point of pilgrimage no merely human mind can imagine. Without it, I suppose the horse-cars would go continually round and round, never stopping, until the cars fell away piecemeal on the track, and the horses collapsed into a mere mass of bones and harness, and the brown-covered books from the Public Library, in the hands of the fading virgins who carried them, had accumulated fines to an incalculable amount.

Boston, notwithstanding its partial destruction by fire, is still a good place to start from. When one meditates an excursion into an unknown and perhaps perilous land, where the flag will not protect him and the greenback will only partially support him, he likes to steady and tranquilize his mind by a peaceful halt and a serene start. So we—for the intelligent reader has already identified us with the two travelers resolved to spend the last night, before beginning our journey, in the quiet of a Boston hotel. Some people go into the country for quiet: we knew better. The country is no place for sleep. The general absence of sound which prevails at night is only a sort of background which brings out more vividly the special and unexpected disturbances which are suddenly sprung upon the restless listener. There are a thousand pokerish noises that no one can account for, which excite the nerves to acute watchfulness.

It is still early, and one is beginning to be lulled by the frogs and the crickets, when the faint rattle of a drum is heard,—just a few preliminary taps. But the soul takes alarm, and well it may, for a roll follows, and then a rub-a-dub-dub, and the farmer's boy who is handling the sticks and pounding the distended skin in a neighboring horse-shed begins to pour out his patriotism in that unending repetition of rub-a-dub-dub which is supposed to represent love of country in the young....