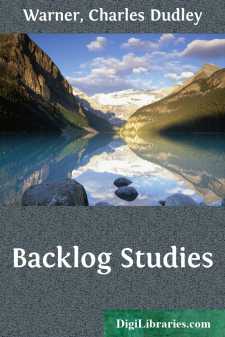 The fire on the hearth has almost gone out in New England; the hearth has gone out; the family has lost its center; age ceases to be respected; sex is only distinguished by a difference between millinery bills and tailors' bills; there is no more toast-and-cider; the young are not allowed to eat mince-pies at ten o'clock at night; half a cheese is no longer set to toast before the fire; you scarcely ever see in front of the coals a row of roasting apples, which a bright little girl, with many a dive and start, shielding her sunny face from the fire with one hand, turns from time to time; scarce are the gray-haired sires who strop their razors on the family Bible, and doze in the chimney-corner. A good many things have gone out with the fire on the hearth.

I do not mean to say that public and private morality have vanished with the hearth. A good degree of purity and considerable happiness are possible with grates and blowers; it is a day of trial, when we are all passing through a fiery furnace, and very likely we shall be purified as we are dried up and wasted away. Of course the family is gone, as an institution, though there still are attempts to bring up a family round a "register." But you might just as well try to bring it up by hand, as without the rallying-point of a hearthstone. Are there any homesteads nowadays? Do people hesitate to change houses any more than they do to change their clothes? People hire houses as they would a masquerade costume, liking, sometimes, to appear for a year in a little fictitious stone-front splendor above their means. Thus it happens that so many people live in houses that do not fit them. I should almost as soon think of wearing another person's clothes as his house; unless I could let it out and take it in until it fitted, and somehow expressed my own character and taste. But we have fallen into the days of conformity. It is no wonder that people constantly go into their neighbors' houses by mistake, just as, in spite of the Maine law, they wear away each other's hats from an evening party. It has almost come to this, that you might as well be anybody else as yourself.

Am I mistaken in supposing that this is owing to the discontinuance of big chimneys, with wide fireplaces in them? How can a person be attached to a house that has no center of attraction, no soul in it, in the visible form of a glowing fire, and a warm chimney, like the heart in the body? When you think of the old homestead, if you ever do, your thoughts go straight to the wide chimney and its burning logs. No wonder that you are ready to move from one fireplaceless house into another. But you have something just as good, you say. Yes, I have heard of it. This age, which imitates everything, even to the virtues of our ancestors, has invented a fireplace, with artificial, iron, or composition logs in it, hacked and painted, in which gas is burned, so that it has the appearance of a wood-fire. This seems to me blasphemy. Do you think a cat would lie down before it?...