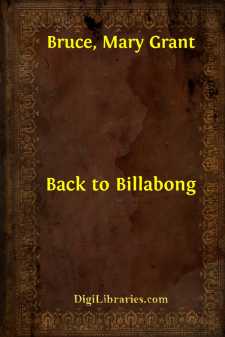 "Do the beastly old map yourself, if you want it. I shan't, anyhow!"

"Aw, Wil-fred!" The boy at the end of the schoolroom table, red-haired, snub-nosed and defiant, mimicked the protesting tone. "I've done it once, and I'm blessed if I do it again."

"No one would dream that it was ever meant for Africa." The young teacher glanced at the scrawled and blotted map before her. "It—it doesn't look like anything earthly. You must do it again, Wilfred."

"Don't you, Wilf." Wilfred's sister leaned back in her chair, tilting it on its hind legs.

"You have nothing to do with Wilfred's work, Avice. Go on with your French."

"Done it, thanks," said Avice. "And I suppose I can speak to my own brother if I like."

"No, you can't—in lesson time," said the teacher.

Cecilia Rainham controlled herself with an effort.

"Bring me your work," she said.

She went over the untidy French exercise with a quick eye. When she had finished it resembled a stormy sky—a groundwork of blue-black, blotted writing, lit by innumerable dashes of red. Cecilia put down her red pencil.

"It's hopeless, Avice. You haven't tried a bit. And you know it isn't hard—you did a far more difficult piece of translation without a mistake last Friday."

"Yes, but the pantomime was coming off on Saturday," said Wilfred, with a grin. "Jolly little chance of tickets from Bob if she didn't!"

"Be quiet, both of you," Cecilia ordered, a spot of red in each pale cheek. "Remember, there will be other Saturdays. Bob will do nothing for you if I can't give him a decent report of you." It was the threat she hated using, but without it she was helpless. And the red-haired pair before her knew to a fraction the extent of her helplessness.

For the moment the threat was effective. Avice went back to her seat, taking with her the excited-looking French exercise, while Wilfred sullenly recommenced a dispirited attack upon the African coastline. Cecilia leaned back in her chair, and took up a half-knitted sock—to drop it hastily, as a long-drawn howl came from a low chair by the window.

"Whatever is the matter, Queenie?"

"I per-ricked my finger," sobbed the youngest Miss Rainham. She stood up, tears raining down her plump cheeks. No one, Cecilia thought, ever cried so easily, so copiously, and so frequently as Queenie. As she stood holding out a very grubby forefinger, on which appeared a minute spot of blood, great tears fell in splashes on the dark green linoleum, while others ran down her face to join them, and others trembled on her lower eyelids, propelled from some artesian fount within.

"Well—it'th bleed-in'!" wailed Queenie. She dabbed the injured member with the pillow case she was hemming, adding a scarlet touch in pleasant contrast to its prevailing grime.

"Well—you're too big a girl to cry for a prick," said Cecilia wearily....