Away in the Wilderness 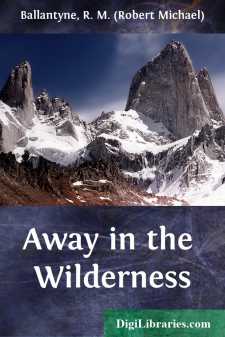 On a beautiful summer evening, not many years ago, a man was seen to ascend the side of a little mound or hillock, on the top of which he lingered to gaze upon the wild scenery that lay stretched out before him.

The man wore the leathern coat and leggings of a North American hunter, or trapper, or backwoodsman; and well did he deserve all these titles, for Jasper Derry was known to his friends as the best hunter, the most successful trapper, and the boldest man in the backwoods.

Jasper was big and strong as well as bold, but he was not a bully. Men of true courage are in general peacefully disposed. Jasper could fight like a lion when there was occasion to do so; but he was gentle and grave, and quiet by nature. He was also extremely good-humoured; had a low soft voice, and, both in mind and body, seemed to delight in a state of repose.

We have said that his coat was made of leather; the moccasins or Indian shoes on his feet were made of the same material. When Jasper first put them on they were soft like a glove of chamois leather, and bright yellow; but hard service had turned them into a dirty brown, which looked more business like. The sun had burned his face and hands to as deep a brown as his coat. On his head he wore a little round cap, which he had made with his own hands, after having caught the black fox that supplied the fur, in one of his own traps. A coloured worsted belt bound his coat round his waist, and beneath the coat he wore a scarlet flannel shirt. A long knife and a small hatchet were stuck in the belt at his back, and in front hung a small cloth bag, which was so thickly ornamented with beads of many colours, that little of the cloth could be seen.

This last was a fire-bag—so called because it contained the flint, steel, and tinder required for making a fire. It also contained Jasper’s pipe and tobacco—for he smoked, as a matter of course. Men smoke everywhere—more’s the pity—and Jasper followed the example of those around him. Smoking was almost his only fault. He was a tremendous smoker. Often, when out of tobacco, he had smoked tea. Frequently he had tried bark and dried leaves; and once, when hard pressed, he had smoked oakum. He would rather have gone without his supper than without his pipe! A powder-horn and shot pouch were slung over his shoulders by two cross belts, and he carried a long single-barrelled gun.

Having gained the top of the hillock, Jasper placed the butt of his long gun on the ground, and, crossing his hands over the muzzle, stood there for some time so motionless, that he might have been mistaken for a statue. A magnificent country was spread out before him. Just in front lay a clear lake of about a mile in extent, and the evening was so still that every tree, stone, and bush on its margin, was reflected as in a mirror....