Avril Being Essays on the Poetry of the French Renaissance 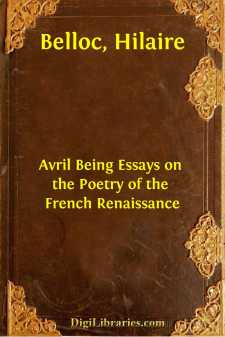 You will, I know, permit me to address you these essays which are more the product of your erudition than of my enthusiasm.

With the motives of their appearance you are familiar.

We have wondered together that a society so avid of experience and enlargement as is ours, should ignore the chief expression of its closest neighbour, its highest rival and its coheir in Europe: should ignore, I mean, the literature of the French.

We have laughed together, not without despair, to see the mind of England, for all its majesty and breadth, informed at the most critical moments in the policy of France by such residents of Paris as were at the best fanatical, at the worst (and most ordinary) corrupt.

Seeing around us here a philosophy and method drawn from northern Germany, a true and subtle sympathy with the Italians, and a perpetual, just and accurate comment upon the minor nationalities of Europe, a mass of recorded travel superior by far to that of other countries, we marvelled that France in particular should have remained unknown.

We were willing, in an earlier youth, to read this riddle in somewhat crude solutions. I think we have each of us arrived, and in a final manner, at the sounder conclusion that historical accident is principally to blame. The chance concurrence of this defeat with that dynastic influence, the slip by which the common sense of political simplicity missed footing in England and fell a generation behind, the marvellous industrial activities of this country, protected by a tradition of political discipline which will remain unique in History; the contemporaneous settling down of France into the equilibrium of power--an equilibrium not established without five hearty civil wars and perhaps a hundred campaigns--all these so separated the two worlds of thought as to leave France excusable for her blindness towards the destinies and nature of England, and England excusable for her continued emptiness of knowledge upon the energy and genius of France: though these were increasing daily, immensely, at our very side.

We have assisted at some straining of such barriers. A long peace, the sterility of Germany, the interesting activities of the Catholic Church, have perhaps not yet changed, but have at least disturbed the mind of the north, and ours, a northern people's, with it. The unity, the passionate patriotism, the close oligarchic polity, the very silence of the English has arrested the eyes of France. By a law which is universal where bodies are bound in one system, an extreme of separation has wrought its own remedy and the return towards a closer union is begun. I do not refer to such ephemeral and artificial manifestations as a special and somewhat humiliating need may demand; I consider rather that large sweep of tendency which was already apparent fifteen years after the Franco-Prussian War. An approach in taste, manners and expression well defined during our undergraduate years, has now introduced much of our inmost life to the French, to us already a hint of their philosophy....