Ave Roma Immortalis, Vol. 1 Studies from the Chronicles of Rome 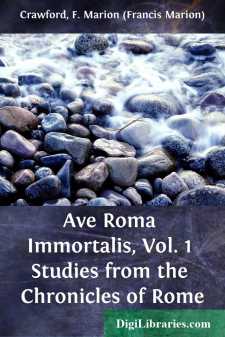 The story of Rome is the most splendid romance in all history. A few shepherds tend their flocks among volcanic hills, listening by day and night to the awful warnings of the subterranean voice,—born in danger, reared in peril, living their lives under perpetual menace of destruction, from generation to generation. Then, at last, the deep voice swells to thunder, roaring up from the earth's heart, the lightning shoots madly round the mountain top, the ground rocks, and the air is darkened with ashes. The moment has come. One man is a leader, but not all will follow him. He leads his small band swiftly down from the heights, and they drive a flock and a little herd before them, while each man carries his few belongings as best he can, and there are few women in the company. The rest would not be saved, and they perish among their huts before another day is over.

Down, always downwards, march the wanderers, rough, rugged, young with the terrible youth of those days, and wise only with the wisdom of nature. Down the steep mountain they go, down over the rich, rolling land, down through the deep forests, unhewn of man, down at last to the river, where seven low hills rise out of the wide plain. One of those hills the leader chooses, rounded and grassy; there they encamp, and they dig a trench and build huts. Pales, protectress of flocks, gives her name to the Palatine Hill. Rumon, the flowing river, names the village Rome, and Rome names the leader Romulus, the Man of the River, the Man of the Village by the River; and to our own time the twenty-first of April is kept and remembered, and even now honoured, for the very day on which the shepherds began to dig their trench on the Palatine, the date of the Foundation of Rome, from which seven hundred and fifty-four years were reckoned to the birth of Christ.

And the shepherds called their leader King, though his kingship was over but few men. Yet they were such men as begin history, and in the scant company there were all the seeds of empire. First the profound faith of natural mankind, unquestioning, immovable, inseparable from every daily thought and action; then fierce strength, and courage, and love of life and of possession; last, obedience to the chosen leader, in clear liberty, when one should fail, to choose another. So the Romans began to win the world, and won it in about six hundred years.

By their camp-fires, by their firesides in their little huts, they told old tales of their race, and round the truth grew up romantic legend, ever dear to the fighting man and to the husbandman alike, with strange tales of their first leader's birth, fit for poets, and woven to stir young hearts to daring, and young hands to smiting. Truth there was under their stories, but how much of it no man can tell: how Amulius of Alba Longa slew his sons, and slew also his daughter, loved of Mars, mother of twin sons left to die in the forest, like Œdipus, father-slayers, as Œdipus was, wolf-suckled, of whom one was born to kill the other and be the first King, and be taken up to Jupiter in storm and lightning at the last. The legend of wise Numa, next, taught by Egeria; her stony image still weeps trickling tears for her royal adept, and his earthen cup, jealously guarded, was worshipped for more than a thousand years; legends of the first Arval brotherhood, dim as the story of Melchisedec, King and priest, but lasting as Rome itself. Tales of King Tullus, when the three Horatii fought for Rome against the three Curiatii, who smote for Alba and lost the day—Tullus Hostilius, grandson of that first Hostus who had fought against the Sabines; and always more legend, and more, and more, sometimes misty, sometimes clear and direct in action as a Greek tragedy. They hover upon the threshold of history, with faces of beauty or of terror, sublime, ridiculous, insignificant, some born of desperate, real deeds, many another, perhaps, first told by some black-haired shepherd mother to her wondering boys at evening, when the brazen pot simmered on the smouldering fire, and the father had not yet come home.

But down beneath the legend lies the fact, in hewn stones already far in the third thousand of their years....