Autobiography: Truth and Fiction Relating to My Life 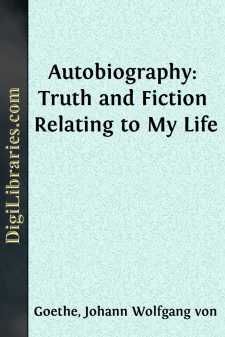 It would appear that for inquirers into Foreign Literature, for all men anxious to see and understand the European world as it lies around them, a great problem is presented in this Goethe; a singular, highly significant phenomenon, and now also means more or less complete for ascertaining its significance. A man of wonderful, nay, unexampled reputation and intellectual influence among forty millions of reflective, serious and cultivated men, invites us to study him; and to determine for ourselves, whether and how far such influence has been salutary, such reputation merited. That this call will one day be answered, that Goethe will be seen and judged of in his real character among us, appears certain enough. His name, long familiar everywhere, has now awakened the attention of critics in all European countries to his works: he is studied wherever true study exists: eagerly studied even in France; nay, some considerable knowledge of his nature and spiritual importance seems already to prevail there. [Footnote: Witness /Le Tasse, Drame par Duval,/ and the Criticisms on it. See also the Essays in the /Globe,/ Nos. 55, 64 (1826).]

For ourselves, meanwhile, in giving all due weight to so curious an exhibition of opinion, it is doubtless our part, at the same time, to beware that we do not give it too much. This universal sentiment of admiration is wonderful, is interesting enough; but it must not lead us astray. We English stand as yet without the sphere of it; neither will we plunge blindly in, but enter considerately, or, if we see good, keep aloof from it altogether. Fame, we may understand, is no sure test of merit, but only a probability of such; it is an accident, not a property, of a man; like light, it can give little or nothing, but at most may show what is given; often it is but a false glare, dazzling the eyes of the vulgar, lending by casual extrinsic splendour the brightness and manifold glance of the diamond to pebbles of no value. A man is in all cases simply the man, of the same intrinsic worth and weakness, whether his worth and weakness lie hidden in the depths of his own consciousness, or be betrumpeted and beshouted from end to end of the habitable globe. These are plain truths, which no one should lose sight of; though, whether in love or in anger, for praise or for condemnation, most of us are too apt to forget them. But least of all can it become the critic to 'follow a multitude to do evil' even when that evil is excess of admiration; on the contrary, it will behoove him to lift up his voice, how feeble soever, how unheeded soever, against the common delusion; from which, if he can save, or help to save any mortal, his endeavours will have been repaid.

With these things in some measure before us, we must remind our readers of another influence at work in this affair, and one acting, as we think, in the contrary direction. That pitiful enough desire for 'originality' which lurks and acts in all minds, will rather, we imagine, lead the critic of Foreign Literature to adopt the negative than the affirmative with regard to Goethe. If a writer indeed feel that he is writing for England alone, invisibly and inaudibly to the rest of the Earth, the temptations may be pretty equally balanced; if he write for some small conclave, which he mistakenly thinks the representative of England, they may sway this way or that, as it chances. But writing in such isolated spirit is no longer possible. Traffic, with its swift ships, is uniting all nations into one; Europe at large is becoming more and more one public; and in this public, the voices for Goethe, compared with those against him, are in the proportion, as we reckon them, both as to the number and value, of perhaps a hundred to one. We take in, not Germany alone, but France and Italy; not the Schlegels and Schellings, but the Manzonis and De Staels. The bias of originality, therefore, may lie to the side of censure; and whoever among us shall step forward, with such knowledge as our common critics have of Goethe, to enlighten the European public, by contradiction in this matter, displays a heroism, which, in estimating his other merits, ought nowise to be forgotten....