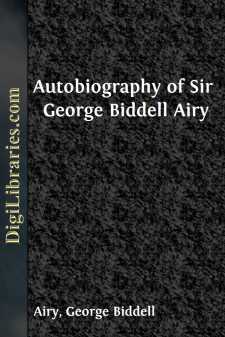 The history of Airy's life, and especially the history of his life's work, is given in the chapters that follow. But it is felt that the present Memoir would be incomplete without a reference to those personal characteristics upon which the work of his life hinged and which can only be very faintly gathered from his Autobiography.

He was of medium stature and not powerfully built: as he advanced in years he stooped a good deal. His hands were large-boned and well-formed. His constitution was remarkably sound. At no period in his life does he seem to have taken the least interest in athletic sports or competitions, but he was a very active pedestrian and could endure a great deal of fatigue. He was by no means wanting in physical courage, and on various occasions, especially in boating expeditions, he ran considerable risks. In debate and controversy he had great self-reliance, and was absolutely fearless. His eye-sight was peculiar, and required correction by spectacles the lenses of which were ground to peculiar curves according to formulae which he himself investigated: with these spectacles he saw extremely well, and he commonly carried three pairs, adapted to different distances: he took great interest in the changes that took place in his eye-sight, and wrote several Papers on the subject. In his later years he became somewhat deaf, but not to the extent of serious personal inconvenience.

The ruling feature of his character was undoubtedly Order. From the time that he went up to Cambridge to the end of his life his system of order was strictly maintained. He wrote his autobiography up to date soon after he had taken his degree, and made his first will as soon as he had any money to leave. His accounts were perfectly kept by double entry throughout his life, and he valued extremely the order of book-keeping: this facility of keeping accounts was very useful to him. He seems not to have destroyed a document of any kind whatever: counterfoils of old cheque-books, notes for tradesmen, circulars, bills, and correspondence of all sorts were carefully preserved in the most complete order from the time that he went to Cambridge; and a huge mass they formed. To a high appreciation of order he attributed in a great degree his command of mathematics, and sometimes spoke of mathematics as nothing more than a system of order carried to a considerable extent. In everything he was methodical and orderly, and he had the greatest dread of disorder creeping into the routine work of the Observatory, even in the smallest matters. As an example, he spent a whole afternoon in writing the word "Empty" on large cards, to be nailed upon a great number of empty packing boxes, because he noticed a little confusion arising from their getting mixed with other boxes containing different articles; and an assistant could not be spared for this work without withdrawing him from his appointed duties. His arrangement of the Observatory correspondence was excellent and elaborate: probably no papers are more easy of reference than those arranged on his system....