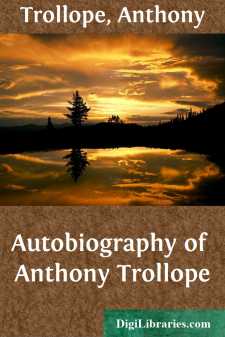 It may be well that I should put a short preface to this book. In the summer of 1878 my father told me that he had written a memoir of his own life. He did not speak about it at length, but said that he had written me a letter, not to be opened until after his death, containing instructions for publication.

This letter was dated 30th April, 1876. I will give here as much of it as concerns the public: "I wish you to accept as a gift from me, given you now, the accompanying pages which contain a memoir of my life. My intention is that they shall be published after my death, and be edited by you. But I leave it altogether to your discretion whether to publish or to suppress the work;—and also to your discretion whether any part or what part shall be omitted. But I would not wish that anything should be added to the memoir. If you wish to say any word as from yourself, let it be done in the shape of a preface or introductory chapter." At the end there is a postscript: "The publication, if made at all, should be effected as soon as possible after my death." My father died on the 6th of December, 1882.

It will be seen, therefore, that my duty has been merely to pass the book through the press conformably to the above instructions. I have placed headings to the right-hand pages throughout the book, and I do not conceive that I was precluded from so doing. Additions of any other sort there have been none; the few footnotes are my father's own additions or corrections. And I have made no alterations. I have suppressed some few passages, but not more than would amount to two printed pages has been omitted. My father has not given any of his own letters, nor was it his wish that any should be published.

So much I would say by way of preface. And I think I may also give in a few words the main incidents in my father's life after he completed his autobiography.

He has said that he had given up hunting; but he still kept two horses for such riding as may be had in or about the immediate neighborhood of London. He continued to ride to the end of his life: he liked the exercise, and I think it would have distressed him not to have had a horse in his stable. But he never spoke willingly on hunting matters. He had at last resolved to give up his favourite amusement, and that as far as he was concerned there should be an end of it. In the spring of 1877 he went to South Africa, and returned early in the following year with a book on the colony already written. In the summer of 1878, he was one of a party of ladies and gentlemen who made an expedition to Iceland in the "Mastiff," one of Mr. John Burns' steam-ships. The journey lasted altogether sixteen days, and during that time Mr. and Mrs. Burns were the hospitable entertainers. When my father returned, he wrote a short account of How the "Mastiffs" went to Iceland. The book was printed, but was intended only for private circulation.

Every day, until his last illness, my father continued his work. He would not otherwise have been happy....