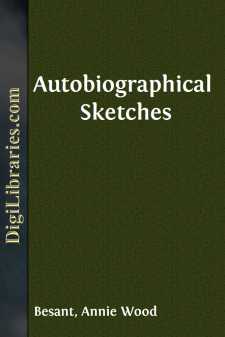 Add to My Favorites
Published: 10 years ago
Downloads: 8
Rating: (0 Votes)

On October 1st, 1847, I made my appearance in this "vale of tears", "little Pheasantina", as I was irreverently called by a giddy aunt, a pet sister of my mother's. Just at that time my father and mother were staying within the boundaries of the City of London, so that I was born well "within the sound of Bow bells".

Though born in London, however, full three quarters of my blood are Irish. My dear mother was a Morris—the spelling of the name having been changed from Maurice some five generations back—and I have often heard her tell a quaint story, illustrative of that family pride which is so common a feature of a decayed Irish family. She was one of a large family, and her father and mother, gay, handsome, and extravagant, had wasted merrily what remained to them of patrimony. I can remember her father well, for I was fourteen years of age when he died. A bent old man, with hair like driven snow, splendidly handsome in his old age, hot-tempered to passion at the lightest provocation, loving and wrath in quick succession. As the family grew larger and the moans grew smaller, many a pinch came on the household, and the parents were glad to accept the offer of a relative to take charge of Emily, the second daughter. A very proud old lady was this maiden aunt, and over the mantel-piece of her drawing-room ever hung a great diagram, a family tree, which mightily impressed the warm imagination of the delicate child she had taken in charge. It was a lengthy and well-grown family tree, tracing back the Morris family to the days of Charlemagne, and branching out from a stock of "the seven kings of France". Was there ever yet a decayed. Irish family that did not trace itself back to some "kings"? and these "Milesian kings"—who had been expelled from France, doubtless for good reasons, and who had sailed across the sea and landed in fair Erin, and there had settled and robbed and fought—did more good 800 years after their death than they did, I expect, during their ill-spent lives, if they proved a source of gentle harmless pride to the old maiden lady who admired their names over her mantel-piece in the earlier half of the present century. And, indeed, they acted as a kind of moral thermometer, in a fashion that would much have astonished their ill-doing and barbarous selves. For my mother has told me how when she would commit some piece of childish naughtiness, her aunt would say, looking gravely over her spectacles at the small culprit: "Emily, your conduct is unworthy of the descendant of the seven kings of France." And Emily, with her sweet grey Irish eyes, and her curling masses of raven-black hair, would cry in penitent shame over her unworthiness, with some vague idea that those royal, and to her very real ancestors, would despise her small sweet rosebud self, as wholly unworthy of their disreputable majesties. But that same maiden aunt trained the child right well, and I keep ever grateful memory of her, though I never knew her, for her share in forming the tenderest, sweetest, proudest, purest, noblest woman I have ever known....