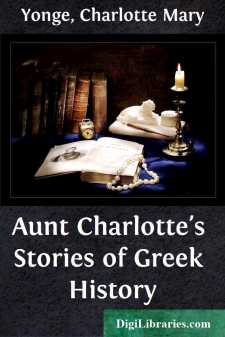 am going to tell you the history of the most wonderful people who ever lived.  But I have to begin with a good deal that is not true; for the people who descended from Japhet’s son Javan, and lived in the beautiful islands and peninsulas called Greece, were not trained in the knowledge of God like the Israelites, but had to guess for themselves.  They made strange stories, partly from the old beliefs they brought from the east, partly from their ways of speaking of the powers of nature—sky, sun, moon, stars, and clouds—as if they were real beings, and so again of good or bad qualities as beings also, and partly from old stories about their forefathers.  These stories got mixed up with their belief, and came to be part of their religion and history; and they wrote beautiful poems about them, and made such lovely statues in their honour, that nobody can understand anything about art or learning who has not learnt these stories.  I must begin with trying to tell you a few of them.

In the first place, the Greeks thought there were twelve greater gods and goddesses who lived in Olympus.  There is really a mountain called Olympus, and those who lived far from it thought it went up into the sky, and that the gods really dwelt on the top of it.  Those who lived near, and knew they did not, thought they lived in the sky.  But the chief of all, the father of gods and men, was the sky-god—Zeus, as the Greeks called him, or Jupiter, as he was called in Latin.  However, as all things are born of Time, so the sky or Jupiter was said to have a father, Time, whose Greek name was Kronos.  His other name was Saturn; and as Time devours his offspring, so Saturn was said to have had the bad habit of eating up his children as fast as they were born, till at last his wife Rhea contrived to give him a stone in swaddling clothes, and while he was biting this hard morsel, Jupiter was saved from him, and afterwards two other sons, Neptune (Poseidon) and Pluto (Hades), who became lords of the ocean and of the world of the spirits of the dead; for on the sea and on death Time’s tooth has no power.  However, Saturn’s reign was thought to have been a very peaceful and happy one.  For as people always think of the days of Paradise, and believe that the days of old were better than their own times, so the Greeks thought there had been four ages—the Golden age, the Silver age, the Brazen age, and the Iron age—and that people had been getting worse in each of them.  Poor old Saturn, after the Silver age, had had to go into retirement, with only his own star, the planet Saturn, left to him; and Jupiter was reigning now, on his throne on Olympus, at the head of the twelve greater gods and goddesses, and it was the Iron age down below.  His star, the planet we still call by his name, was much larger and brighter than Saturn.  Jupiter was always thought of by the Greeks as a majestic-looking man in his full strength, with thick hair and beard, and with lightnings in his hand and an eagle by his side.  These lightnings or thunderbolts were forged by his crooked son Vulcan (Hephæstion), the god of fire, the smith and armourer of Olympus, whose smithies were in the volcanoes (so called from his name), and whose workmen were the Cyclops or Round Eyes—giants, each with one eye in the middle of his forehead.  Once, indeed, Jupiter had needed his bolts, for the Titans, a horrible race of monstrous giants, of whom the worst was Briareus, who had a hundred hands, had tried, by piling up mountains one upon the other, to scale heaven and throw him down; but when Jupiter was hardest pressed, a dreadful pain in his head caused him to bid Vulcan to strike it with his hammer.  Then out darted Heavenly Wisdom, his beautiful daughter Pallas Athene or Minerva, fully armed, with piercing, shining eyes, and by her counsels he cast down the Titans, and heaped their own mountains, Etna and Ossa and Pelion, on them to keep them down; and whenever there was an earthquake, it was thought to be caused by one of these giants struggling to get free, though perhaps there was some remembrance of the tower of Babel in the story.  Pallas, this glorious daughter of Jupiter, was wise, brave, and strong, and she was also the goddess of women’s works—of all spinning, weaving, and sewing.