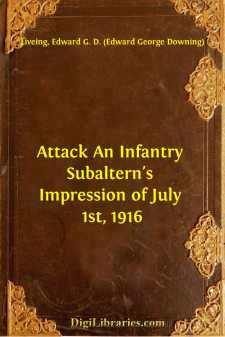 The attack on the fortified village of Gommecourt, which Mr. Liveing describes in these pages with such power and colour, was a part of the first great allied attack on July 1, 1916, which began the battle of the Somme. That battle, so far as it concerns our own troops, may be divided into two sectors: one, to the south of the Ancre River, a sector of advance, the other, to the north of the Ancre River, a containing sector, in which no advance was possible. Gommecourt itself, which made a slight but important salient in the enemy line in the containing sector, was the most northern point attacked in that first day's fighting.

Though the Gommecourt position is not impressive to look at, most of our soldiers are agreed that it was one of the very strongest points in the enemy's fortified line on the Western Front. French and Russian officers, who have seen it since the enemy left it, have described it as "terrible" and as "the very devil." There can be no doubt that it was all that they say.

The country in that part is high-lying chalk downland, something like the downland of Berkshire and Buckinghamshire, though generally barer of trees, and less bold in its valleys. Before the war it was cultivated, hedgeless land, under corn and sugar-beet. The chalk is usually well-covered, as in Buckinghamshire, with a fat clay. As the French social tendency is all to the community, there are few lonely farms in that countryside as there would be with us. The inhabitants live in many compact villages, each with a church, a market-place, a watering-place for stock, and sometimes a château and park. Most of the villages are built of red brick, and the churches are of stone, not (as in the chalk countries with us) of dressed flint. Nearly all the villages are planted about with orchards; some have copses of timber trees. In general, from any distance, the villages stand out upon the downland as clumps of woodland. Nearly everywhere near the battlefield a clump of orchard, with an occasional dark fir in it, is the mark of some small village. In time of peace the Picardy farming community numbered some two or three hundred souls. Gommecourt and Hébuterne were of the larger kind of village.

A traveller coming towards Gommecourt as Mr. Liveing came to it, from the west, sees nothing of the Gommecourt position till he reaches Hébuterne. It is hidden from him by the tilt of the high-lying chalk plateau, and by the woodland and orchards round Hébuterne village. Passing through this village, which is now deserted, save for a few cats, one comes to a fringe of orchard, now deep in grass, and of exquisite beauty. From the hedge of this fringe of orchard one sees the Gommecourt position straight in front, with the Gommecourt salient curving round on slightly rising ground, so as to enclose the left flank.

At first sight the position is not remarkable. One sees, to the left, a slight rise or swelling in the chalk, covered thickly with the remains and stumps of noble trees, now mostly killed by shell-fire....