Atheism Among the People 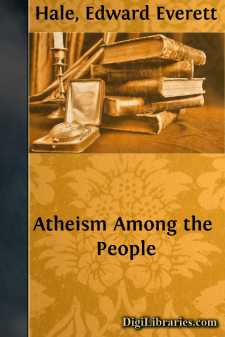 ATHEISM AMONG THE PEOPLE. I.

I have often asked myself, “Why am I a Republican?—Why am I the partizan of equitable Democracy, organized and established as a good and strong Government?—Why have I a real love of the People—a love always serious, and sometimes even tender?—What has the People done for me? I was not born in the ranks of the People. I was born between the high Aristocracy and what was then called the inferior classes, in the days when there were classes, where are now equal citizens in various callings. I never starved in the People’s famine; I never groaned, personally, in the People’s miseries; I never sweat with its sweat; I was never benumbed with its cold. Why then, I repeat it, do I hunger in its hunger, thirst with its thirst, warm under its sun, freeze under its cold, grieve under its sorrows? Why should I not care for it as little as for that which passes at the antipodes?—turn away my eyes, close my ears, think of other things, and wrap myself up in that soft, thick garment of indifference and egotism, in which I can shelter myself, and indulge my separate personal tastes, without asking whether, below me,—in street, garret, or cottage, there is a rich People, or a beggar People; a religious People, or an atheistic People; a People of idlers, or of workers; a People of Helots, or of citizens?”

And whenever I have thus questioned myself, I have thus answered myself:—“I love the people because I believe in God. For, if I did not believe in God, what would the people be to me? I should enjoy at ease that lucky throw of the dice, which chance had turned up for me, the day of my birth; and, with a secret, savage joy, I should say, ‘So much the worse for the losers!—the world is a lottery. Woe to the conquered!’” I cannot, indeed, say this without shame and cruelty,—for, I repeat it, I believe in God.

“And what is there in common,” you will say to me, “between your belief in God and your love for the People?” I answer: My belief in God is not that vague, confused, indefinite, shadowy sentiment which compels one to suppose a principle because he sees consequences,—a cause where he contemplates effects, a source where he sees the rush of the inexhaustible river of life, of forms, of substances, absorbed for ever in the ocean, and renewed unceasingly from creation. The belief in God, which is thus perceived and conceived, is, so to speak, only a mechanical sensation of the interior eye,—an instinct of intelligence, in some sort forced and brutal,—an evidence, not reasonable, not religious, not perfect, not meritorious; but like the material evidence of light, which enters our eyes when we open them to the day; like the evidence of sound which we hear when we listen to any noise; like the evidence of touch when we plunge our limbs in the waves of the sea, and shiver at the contact. This elementary, gross, instinctive, involuntary belief in God, is not the living, intelligent, active, and legislative faith of humanity....