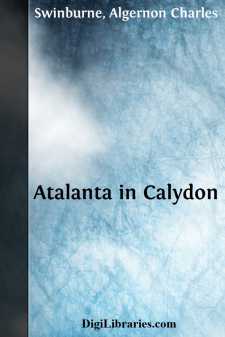 Althaea, daughter of Thestius and Eurythemis, queen of Calydon, being with child of Meleager her first-born son, dreamed that she brought forth a brand burning; and upon his birth came the three Fates and prophesied of him three things, namely these; that he should have great strength of his hands, and good fortune in this life, and that he should live no longer when the brand then in the fire were consumed: wherefore his mother plucked it forth and kept it by her. And the child being a man grown sailed with Jason after the fleece of gold, and won himself great praise of all men living; and when the tribes of the north and west made war upon Aetolia, he fought against their army and scattered it. But Artemis, having at the first stirred up these tribes to war against Oeneus king of Calydon, because he had offered sacrifice to all the gods saving her alone, but her he had forgotten to honour, was yet more wroth because of the destruction of this army, and sent upon the land of Calydon a wild boar which slew many and wasted all their increase, but him could none slay, and many went against him and perished. Then were all the chief men of Greece gathered together, and among them Atalanta daughter of Iasius the Arcadian, a virgin, for whose sake Artemis let slay the boar, seeing she favoured the maiden greatly; and Meleager having despatched it gave the spoil thereof to Atalanta, as one beyond measure enamoured of her; but the brethren of Althaea his mother, Toxeus and Plexippus, with such others as misliked that she only should bear off the praise whereas many had borne the labour, laid wait for her to take away her spoil; but Meleager fought against them and slew them: whom when Althaea their sister beheld and knew to be slain of her son, she waxed for wrath and sorrow like as one mad, and taking the brand whereby the measure of her son's life was meted to him, she cast it upon a fire; and with the wasting thereof his life likewise wasted away, that being brought back to his father's house he died in a brief space, and his mother also endured not long after for very sorrow; and this was his end, and the end of that hunting.

Maiden, and mistress of the months and stars  Now folded in the flowerless fields of heaven,  Goddess whom all gods love with threefold heart,  Being treble in thy divided deity,  A light for dead men and dark hours, a foot  Swift on the hills as morning, and a hand  To all things fierce and fleet that roar and range  Mortal, with gentler shafts than snow or sleep;  Hear now and help and lift no violent hand,  But favourable and fair as thine eye's beam  Hidden and shown in heaven, for I all night  Amid the king's hounds and the hunting men  Have wrought and worshipped toward thee; nor shall man  See goodlier hounds or deadlier edge of spears,  But for the end, that lies unreached at yet  Between the hands and on the knees of gods,  O fair-faced sun killing the stars and dews  And dreams and desolation of the night...!