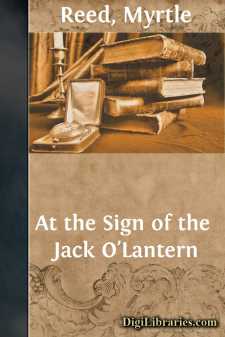 The End of the Honeymoon

It was certainly a queer house. Even through the blinding storm they could distinguish its eccentric outlines as they alighted from the stage. Dorothy laughed happily, heedless of the fact that her husband’s umbrella was dripping down her neck. “It’s a dear old place,” she cried; “I love it already!”

For an instant a flash of lightning turned the peculiar windows into sheets of flame, then all was dark again. Harlan’s answer was drowned by a crash of thunder and the turning of the heavy wheels on the gravelled road.

“Don’t stop,” shouted the driver; “I’ll come up to-morrer for the money. Good luck to you—an’ the Jack-o’-Lantern!”

“What did he mean?” asked Dorothy, shaking out her wet skirts, when they were safely inside the door. “Who’s got a Jack-o’-Lantern?”

“You can search me,” answered Harlan, concisely, fumbling for a match. “I suppose we’ve got it. Anyhow, we’ll have a look at this sepulchral mansion presently.”

His deep voice echoed and re-echoed through the empty rooms, and Dorothy laughed; a little hysterically this time. Match after match sputtered and failed. “Couldn’t have got much wetter if I’d been in swimming,” he grumbled. “Here goes the last one.”

By the uncertain light they found a candle and Harlan drew a long breath of relief. “It would have been pleasant, wouldn’t it?” he went on. “We could have sat on the stairs until morning, or broken our admirable necks in falling over strange furniture. The next thing is a fire. Wonder where my distinguished relative kept his wood?”

Lighting another candle, he went off on a tour of investigation, leaving Dorothy alone.

She could not repress a shiver as she glanced around the gloomy room. The bare loneliness of the place was accentuated by the depressing furniture, which belonged to the black walnut and haircloth period. On the marble-topped table, in the exact centre of the room, was a red plush album, flanked on one side by a hideous china vase, and on the other by a basket of wax flowers under a glass shade.

Her home-coming! How often she had dreamed of it, never for a moment guessing that it might be like this! She had fancied a little house in a suburb, or a cosy apartment in the city, and a lump came into her throat as her air castle dissolved into utter ruin. She was one of those rare, unhappy women whose natures are so finely attuned to beauty that ugliness hurts like physical pain.

She sat down on one of the slippery haircloth chairs, facing the mantel where the single candle threw its tiny light afar. Little by little the room crept into shadowy relief—the melodeon in the corner, the what-not, with its burden of incongruous ornaments, and even the easel bearing the crayon portrait of the former mistress of the house, becoming faintly visible.

Presently, from above the mantel, appeared eyes. Dorothy felt them first, then looked up affrighted. From the darkness they gleamed upon her in a way that made her heart stand still....