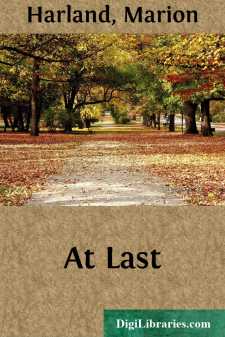 Mrs. Rachel Sutton was a born match maker, and she had cultivated the gift by diligent practice. As the sight of a tendrilled vine suggests the need and fitness of a trellis, and a stray glove invariably brings to mind the thought of its absent fellow, so every disengaged spinster of marriageable age was an appeal—pathetic and sure—to the dear woman's helpful sympathy, and her whole soul went out in compassion over such "nice" and an appropriated bachelors as crossed her orbit, like blind and dizzy comets.

Her propensity, and her conscientious indulgence of the same, were proverbial among her acquaintances, but no one—not even prudish and fearsome maidens of altogether uncertain age, and prudent mammas, equally alive to expediency and decorum—had ever labelled her "Dangerous," while with young people she was a universal favorite. Although, with an eye single to her hobby, she regarded a man as an uninteresting molecule of animated nature, unless circumstances warranted her in recognizing in him the possible lover of some waiting fair one, and it was notorious that she reprobated as worse than useless—positively demoralizing, in fact—such friendships between young persons of opposite sexes as held out no earnest of prospective betrothal, she was confidante-general to half the girls in the county, and a standing advisory committee of one upon all points relative to their associations with the beaux of the region. The latter, on their side, paid their court to the worthy and influential widow as punctiliously, if not so heartily, as did their gentle friends. Not that the task was disagreeable. At fifty years of age, Mrs. Button was plump and comely; her fair curls unfaded, and still full and glossy; her blue eyes capable of languishing into moist appreciation of a woful heart-history, or sparkling rapturously at the news of a triumphant wooing; her little fat hands were swift and graceful, and her complexion so infantine in its clear white and pink as to lead many to believe and some—I need not say of which gender—to practise clandestinely upon the story that she had bathed her face in warm milk, night and morning, for forty years. The more sagacious averred, however, that the secret of her continued youth lay in her kindly, unwithered heart, in her loving thoughtfulness for others' weal, and her avoidance, upon philosophical and religions grounds, of whatever approximated the discontented retrospection winch goes with the multitude by the name of self-examination.

Our bonnie widow had her foibles and vanities, but the first were amiable, the latter superficial and harmless, usually rather pleasant than objectionable. She was very proud, for instance, of her success in the profession she had taken up, and which she pursued con amore; very jealous for the reputation for connubial felicity of those she had aided to couple in the leash matrimonial, and more uncharitable toward malicious meddlers or thoughtless triflers with the course of true love; more implacable to match-breakers than to the most atrocious phases of schism, heresy, and sedition in church or state, against which she had, from her childhood, been taught to pray....