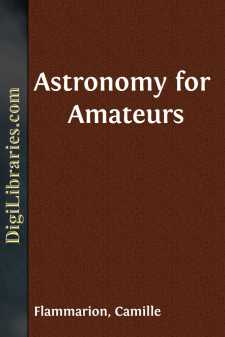 The Science of Astronomy is sublime and beautiful. Noble, elevating, consoling, divine, it gives us wings, and bears us through Infinitude. In these ethereal regions all is pure, luminous, and splendid. Dreams of the Ideal, even of the Inaccessible, weave their subtle spells upon us. The imagination soars aloft, and aspires to the sources of Eternal Beauty.

What greater delight can be conceived, on a fine spring evening, at the hour when the crescent moon is shining in the West amid the last glimmer of twilight, than the contemplation of that grand and silent spectacle of the stars stepping forth in sequence in the vast Heavens? All sounds of life die out upon the earth, the last notes of the sleepy birds have sunk away, the Angelus of the church hard by has rung the close of day. But if life is arrested around us, we may seek it in the Heavens. These incandescing orbs are so many points of interrogation suspended above our heads in the inaccessible depths of space.... Gradually they multiply. There is Venus, the white star of the shepherd. There Mars, the little celestial world so near our own. There the giant Jupiter. The seven stars of the Great Bear seem to point out the pole, while they slowly revolve around it.... What is this nebulous light that blanches the darkness of the heavens, and traverses the constellations like a celestial path? It is the Galaxy, the Milky Way, composed of millions on millions of suns!... The darkness is profound, the abyss immense.... See! Yonder a shooting star glides silently across the sky, and disappears!...

Who can remain insensible to this magic spectacle of the starry Heavens? Where is the mind that is not attracted to these enigmas? The intelligence of the amateur, the feminine, no less than the more material and prosaic masculine mind, is well adapted to the consideration of astronomical problems. Women, indeed, are naturally predisposed to these contemplative studies. And the part they are called to play in the education of our children is so vast, and so important, that the elements of Astronomy might well be taught by the young mother herself to the budding minds that are curious about every issue—whose first impressions are so keen and so enduring.

Throughout the ages women have occupied themselves successfully with Astronomy, not merely in its contemplative and descriptive, but also in its mathematical aspects. Of such, the most illustrious was the beautiful and learned Hypatia of Alexandria, born in the year 375 of our era, public lecturer on geometry, algebra, and astronomy, and author of three works of great importance. Then, in that age of ignorance and fanaticism, she fell a victim to human stupidity and malice, was dragged from her chariot while crossing the Cathedral Square, in March, 415, stripped of her garments, stoned to death, and burned as a dishonored witch!

Among the women inspired with a passion for the Heavens may be cited St. Catherine of Alexandria, admired for her learning, her beauty and her virtue. She was martyred in the reign of Maximinus Daza, about the year 312, and has given her name to one of the lunar rings.

Another celebrated female mathematician was Madame Hortense Lepaute, born in 1723, who collaborated with Clairaut in the immense calculations by which he predicted the return of Halley's Comet. "Madame Lepaute," wrote Lalande, "gave us such immense assistance that, without her, we should never have ventured to undertake this enormous labor, in which it was necessary to calculate for every degree, and for a hundred and fifty years, the distances and forces of the planets acting by their attraction on the comet. During more than six months, we calculated from morning to night, sometimes even at table, and as the result of this forced labor I contracted an illness that has changed my constitution for life; but it was important to publish the result before the arrival of the comet."

This extract will suffice for the appreciation of the scientific ardor of Madame Lepaute. We are indebted to her for some considerable works. Her husband was clock-maker to the King....