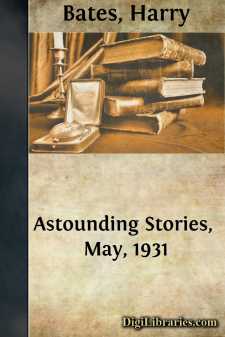 There Comes a New World Mysterious, dark, out of the unknown deep comes a new satellite to lure three courageous Earthlings on to strange adventures.

he one hundred and fifty-ninth floor of the great Transportation Building allowed one standing at a window to look down upon the roofs of the countless buildings that were New York.

Flat-decked, all of them; busy places of hangars and machine shops and strange aircraft, large and small, that rose vertically under the lift of flashing helicopters.

The air was alive and vibrant with directed streams of stubby-winged shapes that drove swiftly on their way, with only a wisp of vapor from their funnel-shaped sterns to mark the continuous explosion that propelled them. Here and there were those that entered a shaft of pale-blue light that somehow outshone the sun. It marked an ascending area, and there ships canted swiftly, swung their blunt noses upward, and vanished, to the upper levels.

A mile and more away, in a great shaft of green light from which all other craft kept clear, a tremendous shape was dropping. Her hull of silver was striped with a broad red band; her multiple helicopters were dazzling flashes in the sunlight. The countless dots that were portholes and the larger observation ports must have held numberless eager faces, for the Oriental Express served a cosmopolitan passenger list.

But Walter Harkness, standing at the window, stared out from troubled, frowning eyes that saw nothing of the kaleidoscopic scene. His back was turned to the group of people in the room, and he had no thought of wonders that were prosaic, nor of passengers, eager or blase; his thoughts were only of freight and of the acres of flat roofs far in the distance where alternate flashes of color marked the descending area for fast freighters of the air. And in his mind he could see what his eyes could not discern—the markings on those roofs that were enormous landing fields: Harkness Terminals, New York.

nly twenty-four, Walt Harkness—owner now of Harkness, Incorporated. Dark hair that curled slightly as it left his forehead; eyes that were taking on the intent, straightforward look that had been his father's and that went straight to the heart of a business proposal with disconcerting directness. But the lips were not set in the hard lines that had marked Harkness Senior; they could still curve into boyish pleasure to mark the enthusiasm that was his.

He was not typically the man of business in his dress. His broad shoulders seemed slender in the loose blouse of blue silk; a narrow scarf of brilliant color was loosely tied; the close, full-length cream-colored trousers were supported by a belt of woven metal, while his shoes were of the coarse-mesh fabric that the latest mode demanded.

He turned now at the sound of Warrington's voice. E. B. Warrington, Counsellor at Law, was the name that glowed softly on the door of this spacious office, and Warrington's gray head was nodding as he dated and indexed a document.

"June twentieth, nineteen seventy-three," he repeated; "a lucky day for you, Walter....