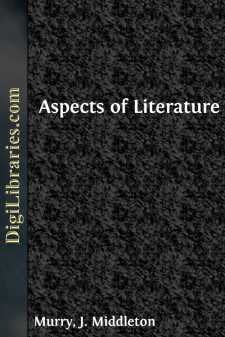 The Function of Criticism

It is curious and interesting to find our younger men of letters actively concerned with the present condition of literary criticism. This is a novel preoccupation for them and one which is, we believe, symptomatic of a general hesitancy and expectation. In the world of letters everything is a little up in the air, volatile and uncrystallised. It is a world of rejections and velleities; in spite of outward similarities, a strangely different world from that of half a dozen years ago. Then one had a tolerable certainty that the new star, if the new star was to appear, would burst upon our vision in the shape of a novel. To-day we feel it might be anything. The cloud no bigger than a man's hand might even be, like Trigorin's in 'The Sea-gull,' like a piano; it has no predetermined form.

This sense of incalculability, which has been aroused by the prodigious literary efflorescence of late years, reacts upon its cause; and the reaction tends by many different paths to express itself finally in the ventilation of problems that hinge about criticism. There is a general feeling that the growth of the young plant has been too luxuriant; a desire to have it vigorously pruned by a capable gardener, in order that its strength may be gathered together to produce a more perfect fruit. There is also a sense that if the lusus naturæ, the writer of genius, were to appear, there ought to be a person or an organisation capable of recognising him, however unexpected his scent or the shape of his leaves. Both these tasks fall upon criticism. The younger generation looks round a little apprehensively to see if there is a gardener whom it can trust, and decides, perhaps a little prematurely, that there is none.

There is reviewing but no criticism, says one icy voice that we have learned to respect. There are pontiffs and potential pontiffs, but no critics, says another disrespectful young man. Oh, for some more Scotch Reviewers to settle the hash of our English bards, sighs a third. And the London Mercury, after whetting our appetite by announcing that it proposed to restore the standards of authoritative criticism, still leaves us a little in the dark as to what these standards are. Mr T.S. Eliot deals more kindly, if more frigidly, with us in the Monthly Chapbook. There are, he says, three kinds of criticism—the historical, the philosophic, and the purely literary.

These separate and distinct kinds, he considers, are but rarely found to-day, even in a fragmentary form; where they do exist, they are almost invariably mingled in an inextricable confusion.

Whether we agree or not with the general condemnation of reviewing implicit in this survey of the situation, or with the division of criticism itself, we have every reason to be grateful to Mr Eliot for disentangling the problem for us....