Artificial Light Its Influence upon Civilization 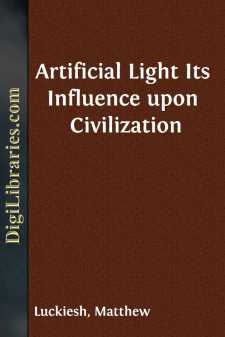 I LIGHT AND PROGRESS

The human race was born in slavery, totally subservient to nature. The earliest primitive beings feasted or starved according to nature's bounty and sweltered or shivered according to the weather. When night fell they sought shelter with animal instinct, for not only were activities almost completely curtailed by darkness but beyond its screen lurked many dangers. It is interesting to philosophize upon a distinction between a human being and the animal just below him in the scale, but it may serve the present purpose to distinguish the human being as that animal in whom there is an unquenchable and insatiable desire for independence. The effort to escape from the bondage of nature is not solely a human instinct; animals burrow or build retreats through the instinct of self-preservation. But this instinct in animals is soon satisfied, whereas in human beings it has been leading ever onward toward complete emancipation.

The progress of civilization is a long chain of countless achievements each one of which has increased man's independence. Early man perhaps did not conceive the idea of fire and then set out to produce it. His infant mind did not operate in this manner. But when he accidentally struck a spark, produced fire by friction, or discovered it in some other manner, he saw its possibility. It is thrilling to picture primitive man at his first bonfire, enjoying the warmth, or at least interested in it. But how wonderful it must have become as twilight's curtain was drawn across the heavens! This controllable fire emitted light. It is easy to imagine primitive man pondering over this phenomenon with his sluggish mind. Doubtless he cautiously picked up a flaming stick and timidly explored the crowding darkness. Perhaps he carried it into his cave and behold! night had retreated from his abode! No longer was it necessary for him to retire to his bed of leaves when daylight failed. The fire not only banished the chill of night but was a power over darkness. Viewed from the standpoint of civilization, its discovery was one of the greatest strides along the highway of human progress. The activities of man were no longer bounded by sunrise and sunset. The march of civilization had begun.

In the present age of abundant artificial light, with its manifold light-sources and accessories which have made possible countless applications of light, mankind does not realize the importance of this comfort. Its wonderful convenience and omnipresence have resulted in indifference toward it by mankind in general, notwithstanding the fact that it is essential to man's most important and educative sense. By extinguishing the light and pondering upon his helplessness in the resulting darkness, man may gain an idea of its overwhelming importance. Those unfortunate persons who suffer the terrible calamity of blindness after years of dependence upon sight will testify in heartrending terms to the importance of light. Milton, whose eyesight had failed, laments,

"Let there be light," and light was over all,

Why am I thus bereaved thy prime decree?

Perhaps only through a similar loss would one fully appreciate the tremendous importance of light to him, but imagination should be capable of convincing him that it is one of the most essential and pleasure-giving phenomena known to mankind.

A retrospective view down the vista of centuries reveals by contrast the complexity with which artificial light is woven into human activities of the present time. Written history fails long before the primitive races are reached, but it is safe to trust the imagination to penetrate the fog of unwritten history and find early man huddled in his cave as daylight wanes. Impelled by the restless spirit of progress, this primitive being grasped the opportunity which fire afforded to extend his activities beyond the boundaries of daylight. The crude art upon the walls of his cave was executed by the flame of a smoking fagot. The fire on the ledge at the entrance to his abode became a symbol of home, as the fire on the hearth has symbolized home and hospitality throughout succeeding ages....