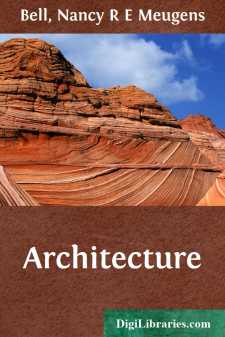 It is only when a building entirely fulfils the purpose for which it is intended and bears the impress of a genuine style that it takes rank as a work of architecture. This definition, exclusive though it at first sight appears, brings within the province of the art every structure which combines with practical utility beauty of design and execution, from the humblest cottage to the most dignified temple or palace. Suitability of material and harmony with its surroundings are among the minor factors that give to a building vitality of character and contribute to its enduring value, a value enhanced by its reflection of the needs and aspirations of those by whom and for whom it was erected.

Wood appears to have been the earliest material used for the building of a home when out-of-door dwellings took the place of the caves that were the first shelters of primitive man. At Joigny in France there still exist examples of what are supposed to be the most ancient of all such dwellings, namely circular holes, locally known as buvards, in which the trunk of a tree had been fixed, the branches plastered over with clay forming the roof of a simple but rain-proof refuge. Huts of wattle and hurdle work dating from prehistoric times have also been preserved, some rising from the ground, others from platforms resting on piles sunk in the beds of lakes. These were in their time superseded by stronger structures, with walls made of squared beams piled up horizontally and fastened together at the corners with wooden pegs; the roof being formed of roughly sawn planks. Out of such primeval houses as these were evolved in the course of centuries the picturesque half-timbered cottages of mediæval Europe and the quaint wooden churches of Norway such as the characteristic one at Hitterdal.

Limestone, granite, and sandstone were used for building at a very remote period in much the same way as wood, large blocks, fresh from the quarry, of all manner of different shapes, being piled up horizontally or stood on edge, no cement being employed, though in certain cases crushed stone was used to fill up the spaces between the blocks. To walls or buildings of which courses of undressed stone were the only materials, the name of Cyclopean has been given because of the erroneous belief that it was originated by the Cyclopes, an imaginary race of giants, supposed to have lived in Thrace, a province of ancient Greece.

Bricks, that is to say, dried blocks of clay, were used at a very early date as a supplement to or substitute for wood and stone for building purposes. The most ancient bricks were not subjected to artificial heat but were simply exposed to the sun, and even when kiln-baked bricks were introduced they were often employed merely to face the older variety. Spacious and lofty buildings consisting entirely of bricks were erected at a very early date in Assyria, Persia, and elsewhere, and some of the most noteworthy architectural survivals of the Roman Empire are of the same material.

The main features of a building are determined by the shape of the walls or the mode of arrangement of the pillars that take the place of walls, the way in which the roof is constructed, and that in which the openings of the doors and windows are spanned. The earliest roofs were flat, and the most ancient mode of linking together the supports of doors and windows was to place a plank of wood or slab of stone known as a lintel across them at the top. To this style of roofing and spanning, which reached its most perfect development in the temples of Greece, the name of the trabeated was given, derived in the first instance from the so-called trabea, a toga adorned with horizontal stripes....