Arcadian Adventures with the Idle Rich 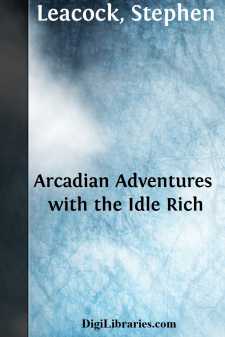 CHAPTER ONE: A Little Dinner with Mr. Lucullus Fyshe

The Mausoleum Club stands on the quietest corner of the best residential street in the City. It is a Grecian building of white stone. About it are great elm trees with birds—the most expensive kind of birds—singing in the branches.

The street in the softer hours of the morning has an almost reverential quiet. Great motors move drowsily along it, with solitary chauffeurs returning at 10.30 after conveying the earlier of the millionaires to their downtown offices. The sunlight flickers through the elm trees, illuminating expensive nurse-maids wheeling valuable children in little perambulators. Some of the children are worth millions and millions. In Europe, no doubt, you may see in the Unter den Linden avenue or the Champs Elysees a little prince or princess go past with a clattering military guard of honour. But that is nothing. It is not half so impressive, in the real sense, as what you may observe every morning on Plutoria Avenue beside the Mausoleum Club in the quietest part of the city. Here you may see a little toddling princess in a rabbit suit who owns fifty distilleries in her own right. There, in a lacquered perambulator, sails past a little hooded head that controls from its cradle an entire New Jersey corporation. The United States attorney-general is suing her as she sits, in a vain attempt to make her dissolve herself into constituent companies. Near by is a child of four, in a khaki suit, who represents the merger of two trunk-line railways. You may meet in the flickered sunlight any number of little princes and princesses far more real than the poor survivals of Europe. Incalculable infants wave their fifty-dollar ivory rattles in an inarticulate greeting to one another. A million dollars of preferred stock laughs merrily in recognition of a majority control going past in a go-cart drawn by an imported nurse. And through it all the sunlight falls through the elm trees, and the birds sing and the motors hum, so that the whole world as seen from the boulevard of Plutoria Avenue is the very pleasantest place imaginable.

Just below Plutoria Avenue, and parallel with it, the trees die out and the brick and stone of the City begins in earnest. Even from the Avenue you see the tops of the sky-scraping buildings in the big commercial streets, and can hear or almost hear the roar of the elevated railway, earning dividends. And beyond that again the City sinks lower, and is choked and crowded with the tangled streets and little houses of the slums.

In fact, if you were to mount to the roof of the Mausoleum Club itself on Plutoria Avenue you could almost see the slums from there. But why should you? And on the other hand, if you never went up on the roof, but only dined inside among the palm trees, you would never know that the slums existed which is much better.

There are broad steps leading up to the club, so broad and so agreeably covered with matting that the physical exertion of lifting oneself from one's motor to the door of the club is reduced to the smallest compass....