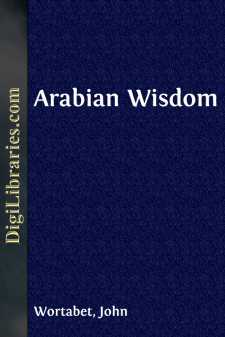 The wise sayings and proverbs of ancient and modern times, and in all the languages I know or to which I had access in translations, have always had a great attraction for me. Drawn from the experiences and study of human life, they have been reduced by wise men to short, pithy sentences, generally expressed in some quaint or striking form, for conveying sound moral truths. They are intended to be maxims of life, or rules of conduct, chiefly for the young, but may be read with pleasure and profit by both young and old. It was with such an object in view that the Editors of the Wisdom of the East series have lately issued a number of small books on this subject carefully translated by competent specialists, and which have been highly appreciated by the English press and public. Their chief desire, however, appears to be "that these books shall be the ambassadors of good-will and understanding between East and West," and also that "the great ideals and lofty philosophy of Oriental thought may help to a revival of that true spirit of Charity which neither despises nor fears the nations of another creed and colour." (See Editorial Note.)

It was also from such motives, but long before I had seen these books, that I have employed a part of my leisure hours in translating into Arabic some of the best sayings of M. Aurelius, Shakespeare, Tennyson, English and other proverbs, and, quite lately, selections from The Instruction of Ptah-Hotep and Sadi's Scroll of Wisdom. They were published in the best Arabic magazines, and have been read by many Christians, Moslems, and Jews in Egypt, Syria, and other countries; and I have been told by some of these Oriental readers that they found in them much matter for thought and instruction, while their views of the community and bonds of human nature among all nations, and in all parts of the world, have been broadened and enlarged.

The Arabic language is particularly rich in this kind of literature, and its proverbs are often appropriately introduced in conversation, letters, and books, and add much force to what is said or written. Many are light and colloquial, and bring a smile or laughter to both speaker and hearer; but many also are distinguished by their classical form and the serious weighty ideas which they convey or inculcate. It was easy, therefore, to find abundant material for this little book, but it was somewhat difficult to make a wise selection, to classify the different subjects under proper heads, and to translate Arabic idioms into good English. Other difficulties were when the proverb in Arabic is formed of two parts which assonate or rhyme, when the piquancy of a short sentence depends so much on the quaintness of its expression, when an untranslatable pun or play upon words is used, or when the phrase is too elliptical or too Oriental in its reference to be easily understood by English readers. The translation I have made is generally literal, sometimes free, but always true to the original. Some I have left in their Oriental form to show the Arabian bent of thought and mode of life....