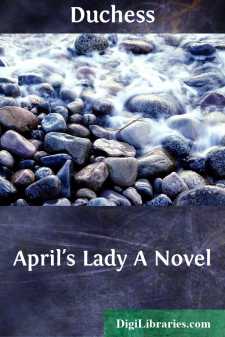 "Philosophy triumphs easily over past and over future evils, but present evils triumph over philosophy."

"A letter from my father," says Mr. Monkton, flinging the letter in question across the breakfast-table to his wife.

"And such a letter after eight years of obstinate silence. There! read it," says her husband, contemptuously. The contempt is all for the writer of the letter.

Mrs. Monkton taking it up, with a most honest curiosity, that might almost be termed anxiety, reads it through, and in turn flings it from her as though it had been a scorpion.

"Never mind, Jack!" says she with a great assumption of indifference that does not hide from her husband the fact that her eyes are full of tears. "Butter that bit of toast for me before it is quite cold, and give Joyce some ham. Ham, darling? or an egg?" to Joyce, with a forced smile that makes her charming face quite sad.

"Have you two been married eight whole years?" asks Joyce laying her elbows on the table, and staring at her sister with an astonished gaze. "It seems like yesterday! What a swindler old Time is. To look at Barbara, one would not believe she could have been born eight years ago."

"Nonsense!" says Mrs. Monkton laughing, and looking as pleased as married women—even the happiest—always do, when they are told they look unmarried. "Why Tommy is seven years old."

"Oh! That's nothing!" says Joyce airily, turning her dark eyes, that are lovelier, if possible, than her sister's, upon the sturdy child who is sitting at his father's right hand. "Tommy, we all know, is much older than his mother. Much more advanced; more learned in the wisdom of this world; aren't you, Tommy?"

But Tommy, at this present moment, is deaf to the charms of conversation, his young mind being nobly bent on proving to his sister (a priceless treasure of six) that the salt-cellar planted between them belongs not to her, but to him! This sounds reasonable, but the difficulty lies in making Mabel believe it. There comes the pause eloquent at last, and then, I regret to say, the free fight!

It might perhaps have been even freer, but for the swift intervention of the paternal relative, who, swooping down upon the two belligerents with a promptitude worthy of all praise, seizes upon his daughter, and in spite of her kicks, which are noble, removes her to the seat on his left hand.

Thus separated hope springs within the breasts of the lookers-on that peace may soon be restored; and indeed, after a sob or two from Mabel, and a few passes of the most reprehensible sort from Tommy (entirely of the facial order), a great calm falls upon the breakfast-room.

"When I was your age, Tommy," says Mr. Monkton addressing his son, and striving to be all that the orthodox parent ought to be, "I should have been soundly whipped if I had behaved to my sister as you have just now behaved to yours!"

"You haven't a sister," says Tommy, after which the argument falls flat. It is true, Mr. Monkton is innocent of a sister, but how did the little demon remember that so apropos....