Appreciations, with an Essay on Style 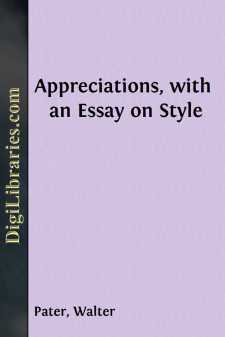 [5] SINCE all progress of mind consists for the most part in differentiation, in the resolution of an obscure and complex object into its component aspects, it is surely the stupidest of losses to confuse things which right reason has put asunder, to lose the sense of achieved distinctions, the distinction between poetry and prose, for instance, or, to speak more exactly, between the laws and characteristic excellences of verse and prose composition. On the other hand, those who have dwelt most emphatically on the distinction between prose and verse, prose and poetry, may sometimes have been tempted to limit the proper functions of prose too narrowly; and this again is at least false economy, as being, in effect, the renunciation of a certain means or faculty, in a world where after all we must needs make the most of things. Critical efforts to limit art a priori, by anticipations regarding the natural incapacity of the material with which this or that artist works, as the sculptor with solid form, or the prose-writer with the ordinary [6] language of men, are always liable to be discredited by the facts of artistic production; and while prose is actually found to be a coloured thing with Bacon, picturesque with Livy and Carlyle, musical with Cicero and Newman, mystical and intimate with Plato and Michelet and Sir Thomas Browne, exalted or florid, it may be, with Milton and Taylor, it will be useless to protest that it can be nothing at all, except something very tamely and narrowly confined to mainly practical ends—a kind of "good round-hand;" as useless as the protest that poetry might not touch prosaic subjects as with Wordsworth, or an abstruse matter as with Browning, or treat contemporary life nobly as with Tennyson. In subordination to one essential beauty in all good literary style, in all literature as a fine art, as there are many beauties of poetry so the beauties of prose are many, and it is the business of criticism to estimate them as such; as it is good in the criticism of verse to look for those hard, logical, and quasi-prosaic excellences which that too has, or needs. To find in the poem, amid the flowers, the allusions, the mixed perspectives, of Lycidas for instance, the thought, the logical structure:—how wholesome! how delightful! as to identify in prose what we call the poetry, the imaginative power, not treating it as out of place and a kind of vagrant intruder, but by way of an estimate of its rights, that is, of its achieved powers, there.

[7] Dryden, with the characteristic instinct of his age, loved to emphasise the distinction between poetry and prose, the protest against their confusion with each other, coming with somewhat diminished effect from one whose poetry was so prosaic. In truth, his sense of prosaic excellence affected his verse rather than his prose, which is not only fervid, richly figured, poetic, as we say, but vitiated, all unconsciously, by many a scanning line. Setting up correctness, that humble merit of prose, as the central literary excellence, he is really a less correct writer than he may seem, still with an imperfect mastery of the relative pronoun....