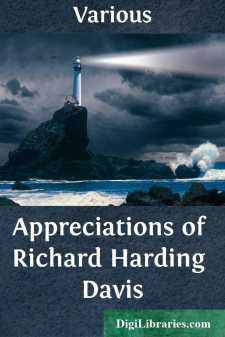 He was almost too good to be true. In addition, the gods loved him, and so he had to die young. Some people think that a man of fifty-two is middle-aged. But if R. H. D. had lived to be a hundred, he would never have grown old. It is not generally known that the name of his other brother was Peter Pan.

Within the year we have played at pirates together, at the taking of sperm whales; and we have ransacked the Westchester Hills for gunsites against the Mexican invasion. And we have made lists of guns, and medicines, and tinned things, in case we should ever happen to go elephant-shooting in Africa. But we weren't going to hurt the elephants. Once R. H. D. shot a hippopotamus and he was always ashamed and sorry. I think he never killed anything else. He wasn't that kind of a sportsman. Of hunting, as of many other things, he has said the last word. Do you remember the Happy Hunting Ground in "The Bar Sinister"?—"where nobody hunts us, and there is nothing to hunt."

Experienced persons tell us that a manhunt is the most exciting of all sports. R. H. D. hunted men in Cuba. He hunted for wounded men who were out in front of the trenches and still under fire, and found some of them and brought them in. The Rough Riders didn't make him an honorary member of their regiment just because he was charming and a faithful friend, but largely because they were a lot of daredevils and he was another.

To hear him talk you wouldn't have thought that he had ever done a brave thing in his life. He talked a great deal, and he talked even better than he wrote (at his best he wrote like an angel), but I have dusted every corner of my memory and cannot recall any story of his in which he played a heroic or successful part. Always he was running at top speed, or hiding behind a tree, or lying face down in a foot of water (for hours!) so as not to be seen. Always he was getting the worst of it. But about the other fellows he told the whole truth with lightning flashes of wit and character building and admiration or contempt. Until the invention of moving pictures the world had nothing in the least like his talk. His eye had photographed, his mind had developed and prepared the slides, his words sent the light through them, and lo and behold, they were reproduced on the screen of your own mind, exact in drawing and color. With the written word or the spoken word he was the greatest recorder and reporter of things that he had seen of any man, perhaps, that ever lived. The history of the last thirty years, its manners and customs and its leading events and inventions, cannot be written truthfully without reference to the records which he has left, to his special articles and to his letters. Read over again the Queen's Jubilee, the Czar's Coronation, the March of the Germans through Brussels, and see for yourself if I speak too zealously, even for a friend, to whom, now that R. H. D. is dead, the world can never be the same again.

But I did not set out to estimate his genius. That matter will come in due time before the unerring tribunal of posterity.

One secret of Mr. Roosevelt's hold upon those who come into contact with him is his energy. Retaining enough for his own use (he uses a good deal, because every day he does the work of five or six men), he distributes the inexhaustible remainder among those who most need it....