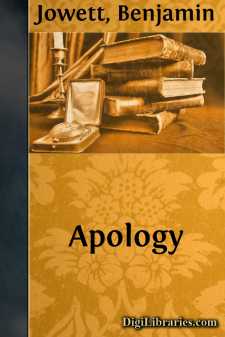 In what relation the Apology of Plato stands to the real defence of Socrates, there are no means of determining. It certainly agrees in tone and character with the description of Xenophon, who says in the Memorabilia that Socrates might have been acquitted 'if in any moderate degree he would have conciliated the favour of the dicasts;' and who informs us in another passage, on the testimony of Hermogenes, the friend of Socrates, that he had no wish to live; and that the divine sign refused to allow him to prepare a defence, and also that Socrates himself declared this to be unnecessary, on the ground that all his life long he had been preparing against that hour. For the speech breathes throughout a spirit of defiance, (ut non supplex aut reus sed magister aut dominus videretur esse judicum', Cic. de Orat.); and the loose and desultory style is an imitation of the 'accustomed manner' in which Socrates spoke in 'the agora and among the tables of the money-changers.' The allusion in the Crito may, perhaps, be adduced as a further evidence of the literal accuracy of some parts. But in the main it must be regarded as the ideal of Socrates, according to Plato's conception of him, appearing in the greatest and most public scene of his life, and in the height of his triumph, when he is weakest, and yet his mastery over mankind is greatest, and his habitual irony acquires a new meaning and a sort of tragic pathos in the face of death. The facts of his life are summed up, and the features of his character are brought out as if by accident in the course of the defence. The conversational manner, the seeming want of arrangement, the ironical simplicity, are found to result in a perfect work of art, which is the portrait of Socrates.

Yet some of the topics may have been actually used by Socrates; and the recollection of his very words may have rung in the ears of his disciple. The Apology of Plato may be compared generally with those speeches of Thucydides in which he has embodied his conception of the lofty character and policy of the great Pericles, and which at the same time furnish a commentary on the situation of affairs from the point of view of the historian. So in the Apology there is an ideal rather than a literal truth; much is said which was not said, and is only Plato's view of the situation. Plato was not, like Xenophon, a chronicler of facts; he does not appear in any of his writings to have aimed at literal accuracy. He is not therefore to be supplemented from the Memorabilia and Symposium of Xenophon, who belongs to an entirely different class of writers. The Apology of Plato is not the report of what Socrates said, but an elaborate composition, quite as much so in fact as one of the Dialogues. And we may perhaps even indulge in the fancy that the actual defence of Socrates was as much greater than the Platonic defence as the master was greater than the disciple. But in any case, some of the words used by him must have been remembered, and some of the facts recorded must have actually occurred....