Anne Bradstreet and Her Time 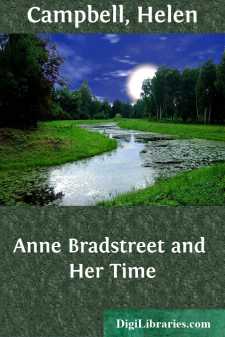 Grave doubts at times arise in the critical mind as to whether America has had any famous women. We are reproached with the fact, that in spite of some two hundred years of existence, we have, as yet, developed no genius in any degree comparable to that of George Eliot and George Sand in the present, or a dozen other as familiar names of the past. One at least of our prominent literary journals has formulated this reproach, and is even sceptical as to the probability of any future of this nature for American women.

What the conditions have been which hindered and hampered such development, will find full place in the story of the one woman who, in the midst of obstacles that might easily have daunted a far stouter soul, spoke such words as her limitations allowed. Anne Bradstreet, as a name standing alone, and represented only by a volume of moral reflections and the often stilted and unnatural verse of the period, would perhaps, hardly claim a place in formal biography. But Anne Bradstreet, the first woman whose work has come down to us from that troublous Colonial time, and who, if not the mother, is at least the grandmother of American literature, in that her direct descendants number some of our most distinguished men of letters calls for some memorial more honorable than a page in an Encyclopedia, or even an octavo edition of her works for the benefit of stray antiquaries here and there. The direct ancestress of the Danas, of Dr. Oliver Wendell Holmes, Wendell Phillips, the Channings, the Buckminsters and other lesser names, would naturally inspire some interest if only in an inquiry as to just what inheritance she handed down, and the story of what she failed to do because of the time into which she was born, holds equal meaning with that of what she did do.

I am indebted to Mr. John Harvard Ellis's sumptuous edition of Anne Bradstreet's works, published in 1867, and containing all her extant works, for all extracts of either prose or verse, as well as for many of the facts incorporated in Mr. Ellis's careful introduction. Miss Bailey's "History of Andover," has proved a valuable aid, but not more so than "The History of New England," by Dr. John Gorham Palfrey, which affords in many points, the most careful and faithful picture on record of the time, personal facts, unfortunately, being of the most meager nature. They have been sought for chiefly, however, in the old records themselves; musty with age and appallingly diffuse as well as numerous, but the only source from which the true flavor of a forgotten time can be extracted. Barren of personal detail as they too often are, the writer of the present imperfect sketch has found Anne Bradstreet, in spite of all such deficiencies, a very real and vital person, and ends her task with the belief which it is hoped that the reader may share, that among the honorable women not a few whose lives are to-day our dearest possession, not one claims tenderer memory than she who died in New England two hundred years ago....