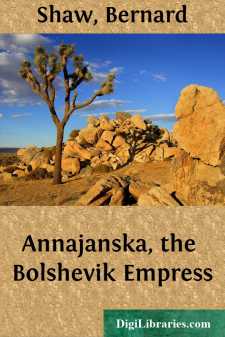 ANNAJANSKA is frankly a bravura piece. The modern variety theatre demands for its "turns" little plays called sketches, to last twenty minutes or so, and to enable some favorite performer to make a brief but dazzling appearance on some barely passable dramatic pretext. Miss Lillah McCarthy and I, as author and actress, have helped to make one another famous on many serious occasions, from Man and Superman to Androcles; and Mr Charles Ricketts has not disdained to snatch moments from his painting and sculpture to design some wonderful dresses for us. We three unbent as Mrs Siddons, Sir Joshua Reynolds and Dr Johnson might have unbent, to devise a turn for the Coliseum variety theatre. Not that we would set down the art of the variety theatre as something to be condescended to, or our own art as elephantine. We should rather crave indulgence as three novices fresh from the awful legitimacy of the highbrow theatre.

Well, Miss McCarthy and Mr Ricketts justified themselves easily in the glamor of the footlights, to the strains of Tchaikovsky's 1812. I fear I did not. I have received only one compliment on my share; and that was from a friend who said, "It is the only one of your works that is not too long." So I have made it a page or two longer, according to my own precept: EMBRACE YOUR REPROACHES: THEY ARE OFTEN GLORIES IN DISGUISE.

Annajanska was first performed at the Coliseum Theatre in London on the 21st January, 1918, with Lillah McCarthy as the Grand Duchess, Henry Miller as Schneidekind, and Randle Ayrton as General Strammfest.

The General's office in a military station on the east front in Beotia. An office table with a telephone, writing materials, official papers, etc., is set across the room. At the end of the table, a comfortable chair for the General. Behind the chair, a window. Facing it at the other end of the table, a plain wooden bench. At the side of the table, with its back to the door, a common chair, with a typewriter before it. Beside the door, which is opposite the end of the bench, a rack for caps and coats. There is nobody in the room.

General Strammfest enters, followed by Lieutenant Schneidekind. They hang up their cloaks and caps. Schneidekind takes a little longer than Strammfest, who comes to the table.

STRAMMFEST. Have you sent my report yet to the government? [He sits down.]

SCHNEIDEKIND [coming to the table]. Not yet, sir. Which government do you wish it sent to? [He sits down.]

STRAMMFEST. That depends. What's the latest? Which of them do you think is most likely to be in power tomorrow morning?

SCHNEIDEKIND. Well, the provisional government was going strong yesterday. But today they say that the Prime Minister has shot himself, and that the extreme left fellow has shot all the others.

STRAMMFEST. Yes: that's all very well; but these fellows always shoot themselves with blank cartridge.

SCHNEIDEKIND. Still, even the blank cartridge means backing down. I should send the report to the Maximilianists.

STRAMMFEST. They're no stronger than the Oppidoshavians; and in my own opinion the Moderate Red Revolutionaries are as likely to come out on top as either of them.

SCHNEIDEKIND. I can easily put a few carbon sheets in the typewriter and send a copy each to the lot.

STRAMMFEST. Waste of paper. You might as well send reports to an infant school. [He throws his head on the table with a groan.]

SCHNEIDEKIND. At my age, sir, I ask myself how can I bear to die?

STRAMMFEST. You are young, young and heartless. You are excited by the revolution: you are attached to abstract things like liberty. But my family has served the Panjandrums of Beotia faithfully for seven centuries. The Panjandrums have kept our place for us at their courts, honored us, promoted us, shed their glory on us, made us what we are....