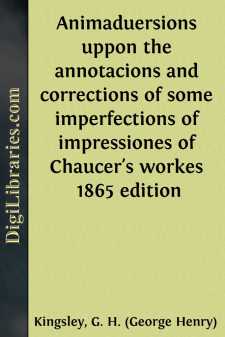 Although only the grandson of the first of his name, the author of the following interesting specimen of 16th-century criticism came of a family of great antiquity, of so great an antiquity, indeed, as to preclude our tracing it back to its origin. This family was originally known as the “De Botfelds,” but in the 15th century one branch adopted the more humble name of “Thynne,” or “of the Inne.” Why the latter name was first assumed has never been satisfacÂ­torily explained. It can hardly be supposed that “John de la Inne de Botfelde,” as he signed himself, kept a veritable hostelry and sold ale and provender to the travellers between Ludlow and Shrewsbury, and most probably the term Inn was used in the sense which has given us “Lincoln’s Inn,” “Gray’s Inn,” or “Furnivall’s Inn,” merely meaning a place of residence of the higher class, though in this case inverted, the Inn giving its name to its owner.

However obtained, the name has been borne by the most successful branch of the De Botfelds down to the present Marquess of Bath, who now represents it. Much interesting matter connected with the family was collected by a late descendant of the older branch, Beriah Botfeld, and published by him in his “Stemmata Botvilliana.”

The first “John of the Inn” married one Jane Bowdler, by whom he had a son Ralph, who married Anne Hygons, and their son William became clerk of the kitchen, and according to some, master of the household to Henry VIII. He married in the first place a lady who, however she may have advanced her husband’s prospects at court, behaved in a manner which must have considerably marred his satisfaction at her success. Those who wish to study the matrimonial sorrows of “Thynnus Aulicus,” as he calls him, may consult Erasmus in his Epistolæ, lib. xv. Epist. xiv.

His second marriage to Anne Bond, daughter of William Bond, clerk of green cloth and master of the household to Henry VIII., was more fortunate, and by her he had daughters and one son, our Francis Thynne.

Though his son gives him no higher position in the court of Henry VIII. than the apparently humble one of clerk of the kitchen, he is careful to let us know that the post was in reality no mean one, and that “there were those of good worship both at court and country” who had at one time been well pleased to be his father’s clerks. That he was a man of superior mind there is no question, and we have a pleasant hint in the following tract of his intimacy with his king, and of their mutual fondness for literature. To William Thynne, indeed, all who read the English language are deeply indebted, for to his industry and love for his author we owe much of what we now possess of Chaucer. Another curious bit of literary gossip to be gleaned from this tract is that William Thynne was a patron and supporter of John Skelton, who was an inmate of his house at Erith, whilst composing that most masterly bit of bitter truth, his “Colin Clout,” a satire perhaps unsurpassed in our language....