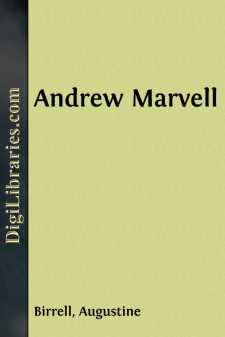 EARLY DAYS AT SCHOOL AND COLLEGE

The name of Andrew Marvell ever sounds sweet, and always has, to use words of Charles Lamb’s, a fine relish to the ear. As the author of poetry of exquisite quality, where for the last time may be heard the priceless note of the Elizabethan lyricist, whilst at the same moment utterance is being given to thoughts and feelings which reach far forward to Wordsworth and Shelley, Marvell can never be forgotten in his native England.

Lines of Marvell’s poetry have secured the final honours, and incurred the peril, of becoming “familiar quotations” ready for use on a great variety of occasion. We may, perhaps, have been bidden once or twice too often to remember how the Royal actor

“Nothing common did, or mean,Upon that memorable scene,”

or have been assured to our surprise by some self-satisfied worldling how he always hears at his back,

A true poet can, however, never be defiled by the rough usage of the populace.

As a politician Marvell lives in the old-fashioned vivacious history-books (which if they die out, as they show some signs of doing, will carry with them half the historic sense of the nation) as the hero of an anecdote of an unsuccessful attempt made upon his political virtue by a minister of the Crown, as a rare type of an inflexible patriot, and as the last member of the House of Commons who was content to take wages from, instead of contributing to the support of, his constituents. As the intimate friend and colleague of Milton, Marvell shares some of the indescribable majesty of that throne. A poet, a scholar, a traveller, a diplomat, a famous wit, an active member of Parliament from the Restoration to his death in 1678, the life of Andrew Marvell might a priori be supposed to be one easy to write, at all events after the fashion in which men’s lives get written. But it is nothing of the kind, as many can testify. A more elusive, non-recorded character is hardly to be found. We know all about him, but very little of him. His parentage, his places of education, many of his friends and acquaintances, are all known. He wrote nearly four hundred letters to his Hull constituents, carefully preserved by the Corporation, in which he narrates with much particularity the course of public business at Westminster. Notwithstanding these materials, the man Andrew Marvell remains undiscovered. He rarely comes to the surface. Though both an author and a member of Parliament, not a trace of personal vanity is noticeable, and vanity is a quality of great assistance to the biographer. That Marvell was a strong, shrewd, capable man of affairs, with enormous powers of self-repression, his Hull correspondence clearly proves, but what more he was it is hard to say. He rarely spoke during his eighteen years in the House of Commons. It is impossible to doubt that such a man in such a place was, in Mr. Disraeli’s phrase, a “personage.” Yet when we look for recognition of what we feel sure was the fact, we fail to find it. Bishop Burnet, in his delightful history, supplies us with sketches of the leading Parliamentarians of Marvell’s day, yet to Marvell himself he refers but once, and then not by name but as “the liveliest droll of the age,” words which mean much but tell little. In Clarendon’s Autobiography, another book which lets the reader into the very clash and crowd of life, there is no mention of one of the author’s most bitter and cruel enemies. With Prince Rupert, Marvell was credited by his contemporaries with a great intimacy; he was a friend of Harrington’s; it may be he was a member of the once famous “Rota” Club; it is impossible to resist the conviction that wherever he went he made a great impression, that he was a central figure in the lobbies of the House of Commons and a man of much account; yet no record survives either to convince posterity of his social charm or even to convey any exact notion of his personal character.

A somewhat solitary man he would appear to have been, though fond of occasional jollity....