And they thought we wouldn't fight 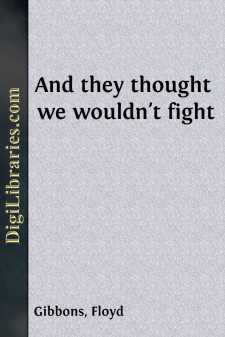 AMERICAN EXPEDITIONARY FORCESOFFICE OF THE COMMANDER-IN-CHIEF

At this time, when you are returning to America, I wish to express to you my appreciation of the cordial cooperation and assistance you have always given us in your important work as correspondent of the Chicago Tribune in France. I also wish to congratulate you on the honor which the French government has done you in giving you the Croix de Guerre, which is but a just reward for the consistent devotion to your duty and personal bravery that you have exhibited.

My personal regrets that you are leaving us at this time are lessened by the knowledge of the great opportunity you will have of giving to our people in America a true picture of the work of the American soldier in France and of impressing on them the necessity of carrying on this work to the end, which can be accomplished only by victory for the Allied arms. You have a great opportunity, and I am confident that you will grasp it, as you have grasped your past opportunities, with success. You have always played the game squarely and with courage, and I wish to thank you.

I understand that you are going to the United States to give lectures on what you have seen on the French front.

No one is more qualified than you to do this, after your brilliant conduct in the Bois de Belleau.

The American Army has proved itself to be magnificent in spirit, in gallantry and in vigor; it has contributed largely to our successes. If you can thus be the echo of my opinion I am sure you will serve a good purpose.

The General Commander-in-Chief Cites for the Croix de Guerre

"Has time after time given proof of his courage and bravery by going to the most exposed posts to gather information. On June 5, 1918, while accompanying a regiment of marines who were attacking a wood, he was severely wounded by three machine gun bullets in going to the rescue of an American officer wounded near him—demonstrating, by this action, the most noble devotion....