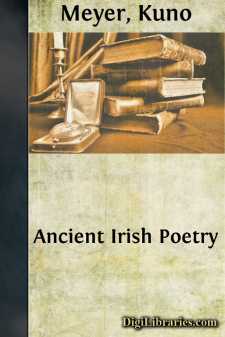 In offering this collection of translations from early Irish poetry to a wider public I feel that I am expected to give a brief account of the literature from which they are taken—a literature so little known that its very existence has been doubted or denied by some, while others, who had the misfortune to make its acquaintance in ill-chosen or inadequate renderings, have refused to recognise any merit in it. The bias and ignorance of English historians and of many professed students of Irish history, who continue to write without a first-hand knowledge of its sources, have also reacted unfavourably upon the study of Irish literature. Slowly, however, the fact is becoming recognised in ever wider circles that the vernacular literature of ancient Ireland is the most primitive and original among the literatures of Western Europe, and that in its origins and development it affords a most fascinating study. Whatever may be its intrinsic merit, its importance as the earliest voice from the dawn of West European civilisation cannot be denied.

Time and again in the course of their history the nations of Western and Northern Europe have had to struggle hard for the preservation of their national life against a powerful denationalising influence proceeding from Rome. Those among them who underwent the Roman conquest lost early, together with their liberty, their most precious national possession, their native language and with it their vernacular literature. Less than a century after the slaughter of Vercingetorix Romanised Gauls were carrying off the palm of Roman eloquence. By the fifth century the Gaulish language was everywhere extinct, without having left behind a single record of its literature. The same fate was shared by all Celtic nationalities of the Continent, and by those numerous Germanic tribes that were conquered by Rome, or came within the sphere of the later Roman civilisation. In Britain, where the Roman occupation was only temporary, its denationalising effect may be gauged by the numerous Latin loan-words preserved to the present day in the Welsh language, by the partial Romanisation of British personal proper names, by the early inscribed stones, which, unlike those of Ireland, are all in Latin, and by the late and slow beginnings of a literature in the vernacular.

It was only on the outskirts of the Continental world, and beyond the sway and influence of the Roman Empire, that some vigorous nations preserved their national institutions intact, and among them there are only three whom letters reached early enough to leave behind some record of their pagan civilisation in a vernacular literature. These were the Irish, the Anglo-Saxons, and, comparative latecomers, the Icelanders.

Again, when Christianity came with the authority of Rome and in the Latin language, now imbued with an additional sanctity, there ensued in all nations a struggle between the vernacular and the foreign tongue for obtaining the rank of a literary language—a struggle from which the languages of the Continental nations, as well as of Britain, emerged only slowly and late. It is not till the end of the eleventh century that we find the beginnings of a national literature in France and Germany. In Ireland, on the other hand, which had received her Christianity not direct from Rome but from Britain and Gaul, and where the Church, far removed from the centre of Roman influence and cut off from the rest of Christendom, was developing on national lines, vernacular literature received a fresh impulse from the new faith. A flourishing primitive Christian literature arose. The national language was employed not only for the purposes of instruction and devotion, in tombstone or other inscriptions, but also in religious prose and poetry, and, still more remarkable, in learned writings. There can, I think, be little doubt that we should hardly have any early records of Anglo-Saxon literature if the English had not in the first instance received Christianity from the Irish. It had been the influence and example of those Irish missionaries who converted Northumberland that taught the Anglian monk to preserve and cultivate his national literature.

Ireland had become the heiress of the classical and theological learning of the Western Empire of the third and fourth centuries, and a period of humanism was thus ushered in which reached its culmination during the sixth and following centuries, the Golden Age of Irish civilisation. The charge that is so often levelled against Irish history, that it has been, as it were, in a backwater, where only the fainter wash of the larger currents reaches, cannot apply to this period....