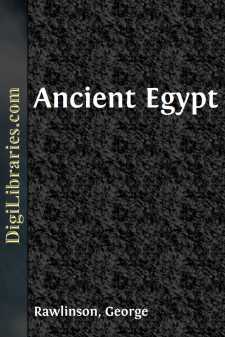 I. THE LAND OF EGYPT.

In shape Egypt is like a lily with a crooked stem. A broad blossom terminates it at its upper end; a button of a bud projects from the stalk a little below the blossom, on the left-hand side. The broad blossom is the Delta, extending from Aboosir to Tineh, a direct distance of a hundred and eighty miles, which the projection of the coast—the graceful swell of the petals—enlarges to two hundred and thirty. The bud is the Fayoum, a natural depression in the hills that shut in the Nile valley on the west, which has been rendered cultivable for many thousands of years by the introduction into it of the Nile water, through a canal known as the "Bahr Yousouf." The long stalk of the lily is the Nile valley itself, which is a ravine scooped in the rocky soil for seven hundred miles from the First Cataract to the apex of the Delta, sometimes not more than a mile broad, never more than eight or ten miles. No other country in the world is so strangely shaped, so long compared to its width, so straggling, so hard to govern from a single centre.

At the first glance, the country seems to divide itself into two strongly contrasted regions; and this was the original impression which it made upon its inhabitants. The natives from a very early time designated their land as "the two lands," and represented it by a hieroglyph in which the form used to express "land" was doubled. The kings were called "chiefs of the Two Lands," and wore two crowns, as being kings of two countries. The Hebrews caught up the idea, and though they sometimes called Egypt "Mazor" in the singular number, preferred commonly to designate it by the dual form "Mizraim," which means "the two Mazors." These "two Mazors," "two Egypts," or "two lands," were, of course, the blossom and the stalk, the broad tract upon the Mediterranean known as "Lower Egypt," or "the Delta," and the long narrow valley that lies, like a green snake, to the south, which bears the name of "Upper Egypt," or "the Said." Nothing is more striking than the contrast between these two regions. Entering Egypt from the Mediterranean, or from Asia by the caravan route, the traveller sees stretching before him an apparently boundless plain, wholly unbroken by natural elevations, generally green with crops or with marshy plants, and canopied by a cloudless sky, which rests everywhere on a distant flat horizon. An absolute monotony surrounds him. No alternation of plain and highland, meadow and forest, no slopes of hills, or hanging woods, or dells, or gorges, or cascades, or rushing streams, or babbling rills, meet his gaze on any side; look which way he will, all is sameness, one vast smooth expanse of rich alluvial soil, varying only in being cultivated or else allowed to lie waste. Turning his back with something of weariness on the dull uniformity of this featureless plain, the wayfarer proceeds southwards, and enters, at the distance of a hundred miles from the coast, on an entirely new scene. Instead of an illimitable prospect meeting him on every side, he finds himself in a comparatively narrow vale, up and down which the eye still commands an extensive view, but where the prospect on either side is blocked at the distance of a few miles by rocky ranges of hills, white or yellow or tawny, sometimes drawing so near as to threaten an obstruction of the river course, sometimes receding so far as to leave some miles of cultivable soil on either side of the stream. The rocky ranges, as he approaches them, have a stern and forbidding aspect. They rise for the most part, abruptly in bare grandeur; on their craggy sides grows neither moss nor heather; no trees clothe their steep heights. They seem intended, like the mountains that enclosed the abode of Rasselas, to keep in the inhabitants of the vale within their narrow limits, and bar them out from any commerce or acquaintance with the regions beyond.

Such is the twofold division of the country which impresses the observer strongly at the first....