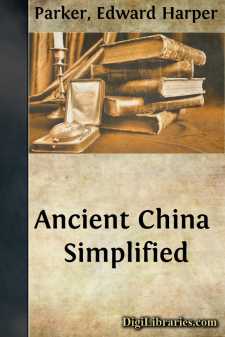 There is much repetition in the book, the same facts being presented, for instance, under the heads of Army, Religion, Confucius, and Marriages. This is intentional, and the object is to keep in the mind impressions which in a strange, ancient, and obscure subject are apt to disappear after perusal of only one or two casual statements.

The Index has been carefully prepared so that any allusion or statement vaguely retained in the mind may at once be confirmed. The chapter headings, or contents list, which itself contains nearly five per cent of the whole letterpress, is so arranged that it omits no feature treated of in the main text.

In the earlier chapters uncouth proper names are reduced to a minimum, but the Index refers by name to specific places and persons only generally mentioned in the earlier pages. For instance, the states of Lu and CHÊNG on pages 22 and 29: it is hard enough to differentiate Ts'i, Tsin, Ts'in, and Ts'u at the outstart, without crowding the memory with fresh names until the necessity for it absolutely arises.

The nine maps are inserted where they are most likely to be useful: it is a good plan to refer to a map each time a place is mentioned, unless the memory suffices to suggest exactly where that place is. After two or three patient references, situations of places will take better root in the mind.

The chapters are split up into short discussions and descriptions, because longer divisions are apt to be tedious where ancient history is concerned. And the narrative of political movement is frequently interrupted by the introduction of new matter, in order to provide novelty and stimulate the imagination. Moreover, all chapters and all subjects converge on one general focus.

On page 15 of "China, her Diplomacy, etc." (John Murray, 1901), I have confessed how tedious I myself had found ancient Chinese history, and how its human interest only begins with foreign relations. I have, however, gone systematically through the mill once more, and my present object is to present general results only obtainable at the cost of laboriously picking out and resetting isolated and often apparently unconnected records of fact.

CHOU: at first a principality in South Shen Si and part of Kan Suh, subject to Shang dynasty; afterwards the imperial dynasty itself.

TS'lN: principality west of the above. When the Chou dynasty moved its capital east into Ho Nan, Ts'in took possession of the old Chou principality.

TSIN: principality (same family as Chou) in South Shan Si (and in part of Shen Si at times).

TS'I: principality, separated by the Yellow River from Tsin andYen; it lay in North Shan Tung, and in the coast part of Chih Li.

WU: still more barbarous principality (ruling caste of the same family as Chou, but senior to Chou) on the Yang-tsz embouchure and Shanghai coasts.