Ancient Ballads and Legends of Hindustan 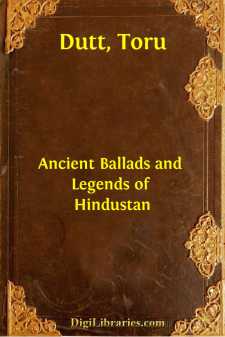 If Toru Dutt were alive, she would still be younger than any recognized European writer, and yet her fame, which is already considerable, has been entirely posthumous. Within the brief space of four years which now divides us from the date of her decease, her genius has been revealed to the world under many phases, and has been recognized throughout France and England. Her name, at least, is no longer unfamiliar in the ear of any well-read man or woman. But at the hour of her death she had published but one book, and that book had found but two reviewers in Europe. One of these, M. André Theuriet, the well-known poet and novelist, gave the "Sheaf gleaned in French Fields" adequate praise in the "Revue des Deux Mondes;" but the other, the writer of the present notice, has a melancholy satisfaction in having been a little earlier still in sounding the only note of welcome which reached the dying poetess from England. It was while Professor W. Minto was editor of the "Examiner," that one day in August, 1876, in the very heart of the dead season for books, I happened to be in the office of that newspaper, and was upbraiding the whole body of publishers for issuing no books worth reviewing. At that moment the postman brought in a thin and sallow packet with a wonderful Indian postmark on it, and containing a most unattractive orange pamphlet of verse, printed at Bhowanipore, and entitled "A Sheaf gleaned in French Fields, by Toru Dutt." This shabby little book of some two hundred pages, without preface or introduction, seemed specially destined by its particular providence to find its way hastily into the waste-paper basket. I remember that Mr. Minto thrust it into my unwilling hands, and said "There! see whether you can't make something of that." A hopeless volume it seemed, with its queer type, published at Bhowanipore, printed at the Saptahiksambad Press! But when at last I took it out of my pocket, what was my surprise and almost rapture to open at such verse as this:—

Still barred thy doors! The far east glows,The morning wind blows fresh and freeShould not the hour that wakes the roseAwaken also thee? All look for thee, Love, Light, and Song,Light in the sky deep red above,Song, in the lark of pinions strong,And in my heart, true Love. Apart we miss our nature's goal,Why strive to cheat our destinies?Was not my love made for thy soul?Thy beauty for mine eyes?No longer sleep,Oh, listen now!I wait and weep,But where art thou?

When poetry is as good as this it does not much matter whether Rouveyre prints it upon Whatman paper, or whether it steals to light in blurred type from some press in Bhowanipore.

Toru Dutt was the youngest of the three children of a high-caste Hindu couple in Bengal. Her father, who survives them all, the Baboo Govin Chunder Dutt, is himself distinguished among his countrymen for the width of his views and the vigour of his intelligence. His only son, Abju, died in 1865, at the age of fourteen, and left his two younger sisters to console their parents....