Ancient and Modern Celebrated Freethinkers Reprinted From an English Work, Entitled "Half-Hours With The Freethinkers." 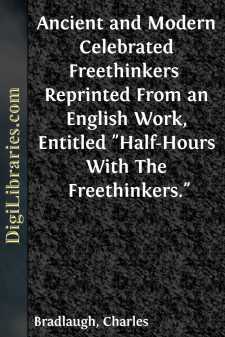 This distinguished Freethinker was born on the 5th of April, 1588, at Malmesbury; hence his cognomen of "the philosopher of Malmesbury." In connection with his birth, we are told that his mother, being a loyal Protestant, was so terrified at the rumored approach of the Spanish Armada, that the birth of her son was hastened in consequence. The subsequent timidity of Hobbes is therefore easily accounted for. The foundation of his education was laid in the grammar school of his native town, where most probably his father (being a clergyman) would officiate as tutor. At the age of fifteen he was sent to Oxford. Five years of assiduous study made him proficient as a tutor; this, combined with his amiability and profound views of society, gained him the respect of the Earl of Devonshire, and he was appointed tutor to the Earl's son, Lord Cavendish. From 1610 to 1628, he was constantly in the society of this nobleman, in the capacity of secretary. In the interval of this time he travelled in France, Germany, and Italy; cultivating in each capital the society of the leading statesmen and philosophers. Lord Herbert, of Cherbury, the first great English Deist, and Ben Jonson, the dramatist, were each his boon companions. In the year 1628, Hobbes again made the tour of the Continent for three years with another pupil, and became acquainted at Pisa with Galileo. In 1631 he was entrusted with the education of another youth of the Devonshire family, and for near five years remained at Paris with his pupil.

Hobbes returned to England in 1636. The troublous politics of this age, with its strong party prejudices, made England the reverse of a pleasant retirement, for either Hobbes or his patrons; so, perceiving the outbreak of the Revolution, he emigrated to Paris. There in the enjoyment of the company of Gassendi and Descartes, with the elite of Parisian genius, he was for awhile contented and happy. Here he engaged in a series of mathematical quarrels, which were prolonged throughout the whole of his life, on the quadrature of the circle. Seven years after, he was appointed mathematical tutor to the Prince of Wales, afterwards Charles II. In 1642, Hobbes published the first of his principal works, "De Cive, or Philosophical Rudiments Concerning Government and Society." It was written to curb the spirit of anarchy, then so rampant in England, by exposing the inevitable results which must of necessity spring from the want of a coherent government amongst a people disunited and uneducated. The principles inculcated in this work were reproduced in the year 1651, in the "Leviathan, or the Matter, Form, and Power of a Commonwealth, Ecclesiastical and Civil;" this, along with a "Treatise on Human Nature," and a small work on "The Body Politic," form the groundwork of the "selfish schools" of moral philosophy. As soon as they were published, they were attacked by the clergy of every country in Europe. They were interdicted by the Pontiffs of the Roman and Greek Church, along with the Protestants scattered over Europe, and the Episcopal authorities of England....