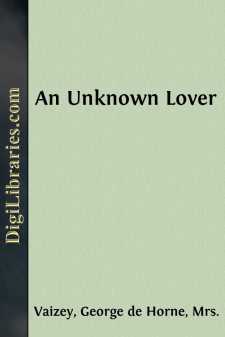 They were seated together at the breakfast-table, a handsome, bored-looking man of thirty-three, and a girl of twenty-six, whose dress of a rich blue made an admirable touch of colour in the dim, brown room.

The house had been designed in the period when shelter from the wind seems to have been the one desired good, and was therefore built in a dell, from which the garden rose in a rapid slope. Today the house would crown the head of the slope, and the dell be relegated to a retreat for occasional hot afternoons; the breakfast-room would face east, and the sun stream in through wide bay-windows, from which fact the spirits of the occupants would benefit afresh with each new morn. As it was the light filtered dimly through mullioned panes, and the oak panelled walls gave back no answering gleam. Curtains and carpet alike were of dull neutral tints, and the one bright spot in the picture was the blue dress of the girl, who sat behind the coffee urn.

Was she beautiful? Was she merely pretty? Was she redeemed from plainness only by a certain quality of interest and charm? At different times an affirmative answer might have been given to each of the three questions in turns; at the moment Katrine Beverley appeared just a tall, graceful girl who arranged her hair with a fine eye for the exigencies of an irregular profile, and who deserved an order of merit for choosing a dress at once so simple, so artistic, and so becoming.

Martin was enjoying a breakfast menu which he sturdily refused to vary. Year in, year out, through dog days, and through frost, the same three courses formed his morning meal. Porridge—the which he ate barbarously with sugar, instead of salt,—bacon and eggs, marmalade and toast. The appearance of the same dish at the dinner-table twice over in a fortnight would have evoked complaint and reprisals, but he would stand no tampering with his breakfast. The Times and the Morning Post lay beside his plate. He glanced at the headlines in the interval between porridge and bacon. Nothing going on! It was the dullest of all dead years.

Katrine was nibbling daintily at fruit and cream. For the moment a fruitarian craze was in full swing, and she shuddered disgustedly at the thought of bacon, refusing to view it in its crisp and rashered form, and obstinately harking back to the sty. In a few months’ time she would probably be discoursing learnedly of the uric acid in fruit, and seriously contemplating a course of “Salisbury.”

When the maid entered the room with the morning’s letters and the young mistress turned over her correspondence with white, ringless hands, the discovery that she was not the wife of the man at the head of the table would have come to an onlooker less as a surprise than as the confirmation of a settled conviction. These two people had not the air of a married couple. As individuals they were more calmly, amicably detached than it is possible to be in that closest and most demanding of relationships; moreover, family likeness betrayed itself in curve and line, and in a natural grace of movement....